BRING BACK THE QUIET CARS

It’s time for Metro-North to bring back the Quiet Cars.

Canceled during the pandemic, the railroad has been dragging its heels in returning this important passenger amenity despite pleas from both passengers and rail advocates alike.

The idea of dedicating one railcar on each train to a peaceful, cellphone-free, “library like” atmosphere originated on Amtrak in 2000 when daily commuters from Philadelphia to NYC made the suggestion.  The railroad embraced it and eventually rolled it out to all of their trains.

Best of all, Amtrak conductors enforced the rule, reminding offenders they should either comply or move to another car.  They once even chastised then-NJ Governor Chris Christie for yapping on his cellphone.  And on one overnight train from Oakland to Portland a woman was arrested, charged with disorderly conduct and kicked off the train for talking for 16 hours on her phone!

As early as 2006 (while serving on the CT Rail Commuter Council) I asked Metro-North to follow Amtrak’s lead (and that of many other major commuter railroads) and add Quiet Cars to our trains.  They downright refused.

Finally, in 2011, Metro-North relented, offering to experiment with the idea.  Almost immediately it ran into problems… not because passengers didn’t want a little peace and quiet but because Metro-North conductors wouldn’t enforce the rules. 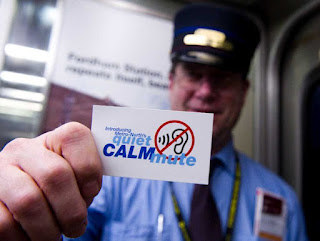 Sure, they made the occasional PA announcement and posted signs.  But when passengers started loud conversations on their phones and got icy stares from their fellow riders, conductors just looked the other way.

That’s strange.  Conductors have no trouble enforcing other rules like showing tickets, banning smoking and luggage on the seats.  But in most cases, they did nothing to enforce this one simple rule:  Please keep quiet.

We saw the same thing happen during COVID when the TSA instituted federal rules about wearing face masks onboard:  no enforcement, so little or no compliance.

Apparently, the conductors didn’t want to be confrontational.  But by looking the other way when they encountered scofflaws, that just lead to passengers confronting each other.  Is that what the railroad wanted?

During the pandemic the Quiet Cars just disappeared.  But now, when the railroad claims to be trying to entice passengers back on trains, they still refuse to return  this simple amenity to make rail riding more tolerable.

The Commuter Council has spoken up on behalf of riders by writing letters.  But CDOT said “talk to the railroad” though the railroad spent four months not even giving the Council the courtesy of a reply.

This time I hope Metro-North does two things:  bring back the Quiet Cars and enforce the rules.

They used to tell us that “train time is your own time”… time to work, read a book or even take a nap.  But train time is really “shared time” with up to 100 other passengers on each car.  That’s why it’s called mass transit.

I think we’d all enjoy our commute a lot more if we showed consideration for our fellow riders.