In the seven years I’ve been writing this column, I’ve offered my views on everything from trains and planes to trolleys and trucks.  But I’ve missed out on a major revolution in personal transport: the bicycle.
Now personally, I’d sooner travel by limo than be perched on a bicycle seat, exposed to the elements, but that’s just me.  Mine is not the generation that’s moving from four wheels to two.
And admittedly, the suburbs of Connecticut are not bike-friendly, but that too is slowly changing.  So this week’s column is a chance to play catch-up on how bicycles are integrating into our transportation network and the work that’s still to be done. 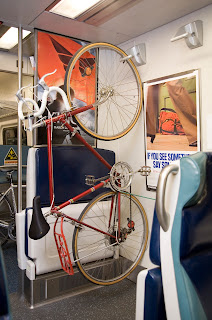 BIKES ON TRAINS:          Now that we have more rail cars (and seats for all paying passengers), it’s time to hold CDOT to its promise of developing (not just testing) bike storage hanger-racks on our trains.  Especially for people traveling intra-state, being able to bring your bike with you makes sense.  And all trains should accommodate bikes, not just those in off-peak.

BIKES AT STATIONS:      For those who want to ride to the train station and leave their bikes there, we need more and more-secure bike racks and lockers at stations.  Westport has some great bike lockers, but most other stations lack this critical amenity.  Biking to the station doesn’t require a seven year wait for a parking permit, but it does require a safe place to lock your bike.

BIKES ON BUSES:           This was an early win for bikers as most local buses now carry bikes on front-mounted racks.  (And no, that would never work on Metro-North trains.)  Bus racks give bike commuters visibility and a secure ride for longer trips.
BIKES ON THE ROAD:     If bikers and drivers must share the same right-of-way, they’ve got to respect each other.  Car-centric drivers are often to blame for accidents, but so too sometimes are aggressive bikers.  New York City has even started a remedial bike riders’ course for offenders to teach them what stop signs and red lights mean.  Better lane markings, signals and ways of separating cars and bikes should make both camps happy and safe.
BIKE PATHS / LANES:     By law, a 1% set-aside in highway spending goes to what’s called “bike-ped” access… building sidewalks and bike-lanes.  Compared to rails and roads, building bike paths and lanes is cheap.  But in our car-centric state, we need to do more.
BIKES AT WORK:            If we’re going to encourage people to bike to their jobs, they need a secure place to lock their wheels during the day… and maybe a place to shower and clean-up.

BIKE SHARING:     Many cities offer racks of bikes available for pick-up and drop-off at nominal rates.  NYC Bike Share will be among the biggest when it finally gets going, offering 600 stations and 10,000 bikes.  But “software” problems are delaying the rollout, which should have started a month ago. The city hopes to offer 1800 bike-lane miles by 2030, rivaling even Paris.
BIKE ADVOCATES:          Here’s more good news.  The folks who ride bikes by choice are well organized and very vocal.  They’re even found official representation in State government with a CT Bicycle and Pedestrian Advisory Board within the CDOT. And in towns and cities large and small there are numerous bike clubs and organizations that can help you get started.
Bicycles may never replace cars or trains, but they are a common sense alternative for many of our transportation needs and need public support.

CT DOT Sells Out To Developers

Sometimes, when you’re tight for cash, you think about hocking the family jewels.  That’s what CDOT is doing, turning over to private developers a most precious piece of real estate and leaving 1000+ daily rail commuters in the lurch.
After years of debate, CDOT has finally issued an RFP (Request for Proposal) for the demolition and replacement of the old parking garage at the Stamford train station.  While the plan calls for a replacement garage with more parking spaces (1000 vs the current 727), it also allows the new garage to be built up to a quarter mile from the train station, not the 200 feet away as the current garage is now.
The “jewel” of this project is the state-owned land where the old garage now sits.  And CDOT seems ready to entertain bids for its use for offices, condo’s, shopping… everything but parking.
If you read the 139-page RFP (as I have, thoroughly), you see that the winning bidder will be decided weighing two considerations:  one-third of the weighting going to proposed design and operation of the new garage, but two-thirds of the weighting goes to maximizing income (profit) for the CDOT from rents or sale of the land.
In other words, the CDOT is twice as interested in making a buck off this land as in serving commuters with a safe, convenient, close-in parking facility.
Bids on the RFP are due in two months, an extraordinary “fast track” for such a once-in-a-lifetime proposal.  Then the negotiations begin with a final decision due by the end of the year.  Ground could be broken by January 2013.
But before the old garage can be demolished (a near impossible task in those tight quarters), replacement parking must be found for the 727 daily parkers within that quarter-mile walking distance of the station.
What that probably means is this:  build a new, permanent 1000-space garage a quarter mile from the station, then demolish the old garage and replace it with condos.  CDOT makes a ton of cash, there are 3 years of construction mayhem and commuters get screwed, hiking to their trains in snow, sleet and rain.
All this in the name of “TOD”, Transit Oriented Development.  What can be done to stop this plan?  Nothing.
In fact, until the CT Rail Commuter Council brought pressure on the CDOT, they were not even going to release the details of the RFP, keeping it all a big secret!  Who’s bidding on the RFP, what their plans are, who’s paying who… all of that is kept from the public. So much for transparency.
What will the parking rates be at the new state-owned garage?  Nobody knows.  How will Amtrak passengers schlep their bags a quarter-mile to the train?  No details.  How will the neighboring towns of Darien, Greenwich and New Canaan handle the “commuter diaspora” during the three years of this project?  Sorry, that’s their problem.  Why not build the offices / condos a quarter mile from the train station and rebuild a new garage at the station where it belongs?  Nah, that wouldn’t make CDOT any money.
The CT Rail Commuter Council has been studying this garage plan for six years, always asking CDOT to replace the old parking structure with a new one on the same location.  Those appeals have been heard, politely, but ignored.
At the very least the RFP could have given priority to the bidder promising to keep commuter parking on-site, but CDOT refused.
Sure, there will be some pro forma public hearings this summer on the environmental impact of this project, but the rants of angry commuters will mean nothing.  The deal is done.  The Malloy administration and its CDOT have told us very clearly that developers’ interests matter more than those of taxpaying commuters.

If you’re looking for family fun this summer, consider visiting one of Connecticut’s many living museums celebrating our rail heritage.
The Shore Line Trolley Museum in East Haven (www.shorelinetrolley.com) was founded in 1945 and now boasts more than one hundred trolley cars in its collection.  It still runs excursion trolleys for a short run on tracks once used by The Connecticut Company for its “F Line” from New Haven to Branford.  You can walk thru the car barns and watch volunteers painstakingly restoring the old cars.  There’s also a small museum exhibit and gift shop.
The Connecticut Trolley Museum in East Windsor (www.ceraonline.org) began in 1940, making it the oldest trolley museum in the US.  It too was started on an existing right-of-way, the Rockville branch of the Hartford & Springfield Street Railway Company.  You can ride a couple of different trolleys a few miles into the woods and back, perhaps disembarking to tour their collection of streetcars, elevated and inter-urbans in the museum’s sheds and barns.
Both museums also offer you the chance to “drive” a streetcar… under supervision and after a little training.  Passengers are not allowed, but your friends can join you if they are brave.  If you’re looking for a day-trip, especially for kids, I can highly recommend either museum.
If you’re looking for trains, you’re also in luck.
The Danbury Railroad Museum (www.danbury.org/drm) is walking distance from the Metro-North station, making this a potential full-day, all-rail adventure.  On weekends they offer train rides and for a premium you can even ride in the caboose or the engine.  They have a great collection of old rail cars and a well stocked gift shop.
For nostalgia fans, The Essex Steam Train (www.essexsteamtrain.com) offers not only daily rides on a classic steam train, but connecting riverboat rides up to the vicinity of Gillette Castle and back.  The first Saturday of each month there’s even a free shuttle train from Old Saybrook rail station, which is served by Amtrak and Shore Line East.  In addition to coach seating you can ride on an open-air car or in a plush First Class Coach.  There’s also a great dinner train, “The Essex Clipper” which offers a 2 ½ hour, four-course meal and a cash bar.
In downtown South Norwalk you can visit what once was a busy switch tower, now the SoNo Switch Tower Museum (www.westctnrhs.org/towerinfo.htm) .  Admission is free (donations welcome) weekends 12 noon to 5 pm.
Also open only on weekends is the Connecticut Eastern Railroad Museum in Willimantic (www.cteastrrmuseum.org).  In addition to guided tours, visitors can operate a replica 1850's-style pump car along a section of rail that once was part of the New Haven Railroad's "Air Line".
The Railroad Museum of New England in Thomaston (www.rmne.org)  offers rail trips on Sundays and Tuesdays along the scenic Naugatuck River in addition to a large collection of restored engines and passenger cars including a last of its kind 1929 New Haven RR first class “smoker” complete with leather bucket seats.

All of these museums are run by volunteers who will appreciate your patronage and support.  They love working on the railroad and will tell you why if you express even the slightest interest in their passion.  Try ‘em.
at July 03, 2012 No comments: