When you’re hitting the highway, a little information can save you a lot of headaches. Knowing where the traffic jams are before you’re caught in them can help you find a detour and avoid lost time.

While some roads are always a mess… I-95 and the Merritt between Greenwich and Norwalk, for example… it’s the unexpected jackknifed tractor trailer and 10- mile back-up that can ruin your day. But how do you get good “intel” on such disasters? Let me share a few tried and true tips from fellow road warriors.

RADIO: I’m a big fan of WCBS 880 AM for its “traffic and weather on the 8’s” reports, which almost always include mention of Connecticut. In AM and PM drive-time, their reports on tri-state traffic can run to five minutes and are almost always accurate. They also encourage “cell-mates” to call in their eyewitness traffic reports, which I do frequently (call 1-212-975-8888).

HIGHWAY RADIO: You might not realize it, but there’s a network of local, low-power radio stations in Connecticut doing nothing but traffic reports. Known as “Highway Advisory Radio”, they’re found at 1610 and 1670 on the AM dial, depending on location. Their looping reports last a minute or two and are generally accurate, originating as they do from State Police offices in Bridgeport where they have access to a network of cameras watching our highways. Traffic info on the large illuminated highway signs (and those helpful reminders to buckle-up and put down the cell-phones) originate from the same place. But like WCBS, they can use your help in finding accidents, so hit 911 on your cell if you see trouble unfolding that affects personal safety and share that info with CT State Police.

TRAFFIC CAMERAS: The same traffic cameras the troopers use are also available online in real time (but as still pictures, not full-motion video) at www.ct.gov/dot Scroll down the list, pick the cameras along your intended route and see for yourself how things look.

CABLE TV: Our friends at Cablevision have their own answer to “traffic and weather together”… Metro-Traffic, found on channel 61. It’s not exactly compelling TV, though they also use the video feed from the traffic cams together with an area map showing color coded traffic flow. Even the Weather Channel is getting in on the act, adding a traffic report to their “Local on the 8’s” forecast showing the average speed on major arteries, again with color coding. (Yes, the speed on the Cross-Bronx was 14 mph the other day. That’s “free flowing” by NYC standards.)

E-MAIL: Thanks to the efforts of State Senator Andrew McDonald of Stamford, the CT DOT was recently persuaded to share its traffic updates in a user-friendly format. Just register your e-mail at www.ct.gov/dot and CDOT will send you free e-mail alerts of major traffic snafus along with guesstimates of how long it will take to clean them up (usually an average of 2 – 3 hours). They’ll also send you a follow-up when things get back to what passes for normal. In its first five months of operation, five thousand e-mails have been registered. By the way… Metro-North offers a similar e-mail alert for train problems. There’s a link from the CDOT website.

TELEPHONE: In many parts of the country you can dial 511 and ask for the latest traffic. Using voice recognition technology and a speech synthesizer, the system will give you an update. There’s no such system in the NYC metro area, though I have heard of pay-per-call systems which probably rely on the same traffic resources listed above. Save your money and just turn on your radio.

None of these technologies will prevent traffic accidents, but they may lessen ensuing traffic jams if the cognoscenti know where they are and can avoid adding to the delays.
Posted by JIM CAMERON at Sunday, September 21, 2008 No comments:

America's Getting Into "Training" 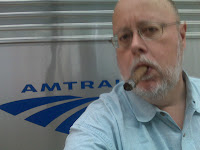 Any occasional reader of this column knows that I’m a “train nut”… a “foamer”, as the railroad folks describe us (because we supposedly foam at the mouth at the sight of a train).

I’m a big fan of rail travel, both on Metro-North and Amtrak, and I’ve written extensively about both. Last October I wrote about my two-day, two-night journey from Chicago to San Diego on “The Southwest Chief”. This week, a less cheerful report on my recent trip to the Windy City and back.

We who live along the Northeast Corridor are spoiled with speedy and frequent rail service. Acela can whisk you to Boston or Washington in just a few hours, admittedly at a premium fare. And the reason is that Amtrak owns and maintains its tracks, or “right of way”, where you’ll seldom encounter any slow-moving freight trains.

Not so in the rest of the nation, where freight “rules”. Consider my recent trip to Chicago by way of Washington DC.

Train # 29, the Capitol Ltd, rolled out of DC on time at 4:05 pm. But I knew we had only a 14% chance of pulling into Chicago the next morning at 8:40 am as scheduled, in time for a business meeting. That’s because Amtrak’s own website warns this train is late on 86% of its 17-hour journeys.

The reason: CSX and Norfolk Southern, the freight railroads whose tracks Amtrak uses to make the trip. Amtrak pays a pretty penny to use these tracks, but to the freight operators passenger trains are second class citizens.

Sure enough, minutes after leaving DC my radio scanner crackled with the sound of a CSX dispatcher trying to route us around the slow-moving coal trains that dominate this two-track railroad through the mountains.

By morning as the sun rose over the steel plants of Indiana we were two hours late. It was stop and go, the rail equivalent of “bumper to bumper” traffic, all the way into Union Station where it was almost 11 am CDT by the time we de-trained, much too late for a full-day of business.

The return trip was even slower. Departing Chicago ten minutes late (7:15 pm) we immediately were delayed in the Indiana rail freight log-jam. Next morning’s 5:45 am scheduled arrival in Pittsburgh was more like 8 am (also delaying the connecting 7:20 am “Pennsylvanian” to Harrisburg and NYC). As we crept toward Washington I kept calling “Julie”, Amtrak’s automated phone agent, asking her our ETA in DC.

As it turned out, we were “only” 2 ½ hours late, but it still gave me just 15 minutes to connect to the last train to Stamford of the day. All told, Chicago to CT was 25 hours.

Mind you, the train ride was enjoyable. My bedroom compartment was comfortable and included a private bathroom / shower and tasty meals in the dining car. The on-board staff was professional and communicative.

But the train was packed! Every sleeping compartment had sold out weeks in advance and coach seats were jammed with new converts sent to “training” by high gas prices.

Amtrak has become a victim of its own success. Like Metro-North, trains are running at capacity, but there are no more cars to be added to handle the crowds… or, in this case, funding to design, let alone order them.

In the Northeast, Acela’s seats are almost always sold out. And the slower, newly branded Northeast Regional trains are increasingly packed. Congress has told Amtrak to become financially self-sufficient. And now’s their chance, if they could add cars to capture this huge surge in ridership and revenue.

Americans are getting into “training” alright. I just wish Amtrak could carry them all.
Posted by JIM CAMERON at Sunday, September 07, 2008 No comments: