First of all, despite what some commuters may recently be thinking, the folks who manage and operate Metro-North are not stupid.  Inconsiderate and uncommunicative sometimes, but not stupid.

Metro-North managers and employees are railroad professionals, justifiably proud of the 96+% on-time performance they achieve on one of the busiest commuter line in the US.  They want to run a world class railroad.  But they can only achieve as much as the states of NY and Connecticut fund them to do. 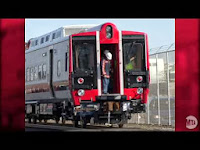 In recent years our legislature gave MNRR $1+ billion to buy badly needed new railcars, a very visible manifestation to commuters that the state was investing in the railroad.  But sufficient funding for inspection and repair of the tracks, the catenary and our 100- year-old bridges is still lacking.

New cars are sexy.  Giving them safe tracks to run on and wires to power them, not so sexy.

What happened when Con Ed’s back-up feeder cable failed at 5:30 am on Wednesday Sept 25th was not an act of God, but human error.  The two agencies knew the main power cable was going to be out of service and calculated, very wrongly, that the single back-up cable would be sufficient.

This raises a number of questions:  Did Con Ed monitor that back-up cable for signs it might fail?  Was it wise to save $1 million by not constructing a back-up for the back-up?  Does Homeland Security know or care that the entire Metro-North and Amtrak Northeast Corridor were depending on this calculation? How many other power sub-stations are in similar danger?

The effects of this outage are many:  the inconvenience to 125,000 daily riders, the economic impact on those commuters’businesses, and longer-term, the economic recovery of our state and nation. 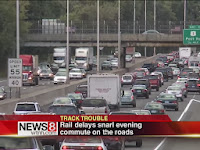 Governor Malloy quickly called this outage just the latest black eye for our state in his efforts to attract businesses to set up shop in the Nutmeg State.  Even if they can tolerate our high taxes, do relocating CEO’s really want to rely on Metro-North to get their employees to and from work or fight the perpetual rush-hour crawl on I-95?

I fear some individual commuters may be reaching the tipping point.  There are plenty of other New York suburbs with good schools and more reliable transportation.  If fed-up Connecticut commuters decide to vote with their feet and move to Westchester or Long Island, they will take their taxes with them.  Remember that Fairfield County pays 40% of all state taxes in Connecticut, so anything that makes our neighborhoods less attractive, hurts the entire state.

And it hurts our house values too.  People live in the towns served by Metro-North because they need to rely on those trains to get to high-paying jobs in NYC.  When that trust is broken, those towns and their houses become less attractive.

If housing values sag, town taxes will have to go up.  The schools will suffer making our towns even less desirable for those leaving the city for the good life in the ‘burbs.

Reliable train service at an affordable price is what makes Fairfield County thrive.  When you begin to doubt the ability of the railroad to keep operating, let alone be on time, it may be time to rethink where you live.
at September 30, 2013 No comments:


I believe passionately in open, transparent government.  The public has a right to know what their elected officials are doing and comment on it before it’s done, usually by way of mandated public hearings.
So I was thrilled to see that the Government Accounting Office has issued a 56 page report sharply critical of the Port Authority of NY-NJ for raising tolls without public input.
In 2011, the Authority jacked up tolls by 50% on bridges and tunnels three days after a single public hearing, held on a weekday during rush hour.  And even at that one hearing, comments were taken without an explanation of the proposal.
It’s as if the Authority went out of its way to avoid criticism, constructive or otherwise.  And for that the GAO rightly criticized them.
We’ve seen this same thing happen many times in Connecticut:
·       The CDOT plans a rail fare increase, baked into its legislative budget, then holds public hearings.  Nothing said at the hearings can affect the decision to boost fares (except possibly to cut train service).
·       The state’s Transportation Strategy Board holds a public hearing on a million dollar study of over a dozen different possible scenarios for tolling on I-95, asking for comments but without ever explaining what the study said.
·       The state chooses to develop land under the Stamford garage in a secret negotiation with developers without ever seeking input from commuters on what’s planned.
The formula is simple, but backwards.  Lawmakers decide what they want to do and then hold a pro forma public hearing to get comments from those who will be affected.  Too often the decision has been made and, for political theater, they just go through the motions of asking for comment.
Here’s a novel idea:  why not hold a public hearing first, asking constituents, commuters and customers what they think?  Explain to them the necessity of a fare hike or development plan and then ask for their reaction.
Decisions by government-run monopolies should be made with input from all the stakeholders, not a handful of bureaucrats.  That’s how you build a consensus in a democracy.
But there is good news.  Recently in my town of Darien the pattern was broken.
A planned parking rate increase at the town’s two train stations, Darien and Noroton Heights, came up for a public hearing before the Board of Selectmen.  A final vote on the plan was on the agenda for the same evening.
But a handful of dismayed commuters who knew no details of the plan (boosting day-parking rates by 66%), turned up at the hearing and protested. They said they had not been warned about the proposal, that commuters had not been told of the public hearing and they had a slew of complaints and concerns about other aspects of the parking lots and stations.
I guess I was the one responsible for that turnout, as I’m the one who posted signs at the station and leafleted cars in the parking lot, something I told the town fathers they could and should have done.
To their credit, and my surprise, the public hearing was continued for another week and the rate-hike pushed back until more commuters could be heard.  Signs were posted at the stations informing commuters of the proposals and the chance to be heard.
The Board of Selectmen was not required to do that, but they did.  And they deserve credit and our thanks for listening first and voting second.


Commuters don’t like surprises.  They plan their daily travels down to the second, and “surprises” take them aback.  Changes in a timetable, fare increases… they all seem inevitable, but what angers commuters is when they happen without input and without warning.
So imagine the impending anger when Darien and Noroton Heights commuters find that their parking rates will be raised and their payment methods changed starting in October.
The scratch-off vouchers will be gone, replaced by pay stations 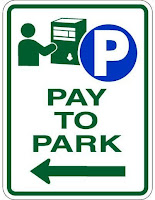 and on-line payment apps.  Annual permit will be penalized if they are tardy in renewal.

These are plans the Board of Selectmen have been discussing for months, but few commuters have any idea what’s coming.
Last Monday night the Board held a perfunctory “public hearing” on the plan they’d already decided to approve with a vote that same evening.  There’s nothing like the political theater of asking constituents’ opinions on a plan you’ve not explained and you’re all set to enact as an ordinance.
The town didn’t post notices at either station about the hearings.  They didn’t send out e-mails to permit holders or get a story in the Darien Times.  It was all legal, but slipped onto an agenda in hopes nobody would notice.
But I noticed.  And because I believe passionately in open government, I e-mail commuters, printed flyers and posted signs at the stations… and four commuters came to the hearing, testifying passionately about the price increase and sharing numerous complaints about station parking.
To her credit, First Selectman Jayme Stevenson admitted there had been inadequate communication about the plan and offered to extend the public hearing into a special meeting on Monday September 16th, 7:30 pm at Town Hall.
To my reckoning, this is an unprecedented move.  Never before has the Board of Selectmen gone out of its way to ask commuters… their customers and constituents… for their opinions and feedback on such a vital town service.
We cannot miss this opportunity. 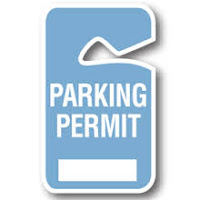 Their plan calls for a 66% price jump in day parking (totaling an additional $500 per year) and “market rate” repricing for annual permits.  How much money will be raised?  How will it be spent?  What about the 8-year waiting list for annual permits?  Security cameras?  Better lighting?
Let’s fill the room with commuters on Monday.  Tell your friends.  Bring your ideas. If you can’t attend, e-mail me your comments.
Let’s show our elected officials that we do care.  Commuting is a big part of our lives.  This is our town and commuters can and should be heard on these plans!