Railroad History is Deja Vu All Over Again

Train crashes, passenger deaths, grade-crossing accidents, derailments.  These are not just the recent history of Metro-North, but events dating back decades.
A friend of mine, Paul Zajkowsky, loves reading the microfilms of our town’s weekly newspaper and has been feeding me clippings of all the stories about the New Haven line.  The news reports sound all too familiar.
APRIL 1939:           Two lads on their way to hunt bullfrogs are almost killed crossing the railroad tracks near Noroton Heights.
JANUARY 1944:     An empty train heading to New Haven smashes into a stopped local train at Darien, creating an explosion heard two miles away.  The engineer is killed and 14 passengers are injured.
FEBRUARY 1944 (and many subsequent dates):     A delivery truck runs off the road at the Hoyt St crossing on the New Canaan branch, gets caught on the tracks and drove into an oncoming train.
JANUARY 1949:     A ten-year-old playing with a length of wire comes in contact with the 11,000-volt overhead caternary.  The resulting flash frightens but does not harm him.
DECEMBER 1954:  A Darien man exits Ernie’s Tavern and clambers up an embankment to cross the railroad tracks.  Struck by a NY-bound express, he suffers a broken leg.
JULY 1955:             Service has become so bad on the New Haven RR that Norman Cousins, editor of the Saturday Review, petitions the Interstate Commerce Commission to fine the railroad “as a hazard to public safety”. Cousins complains that trains are so crowded that a dozen passengers must ride standing in the vestibule while others ride in the washrooms.
JULY 1955:             New Haven RR President Patrick McGinnis tells the Norwalk Chamber of Commerce that local commuters will now have to pay $5 a month for station parking.  “I’m a businessman,” he tells them. “I’m not the Ford Foundation”.
OCTOBER 1955:     A flash flood washes out tracks near Noroton Heights just as a 78-car freight train passes thru at 35 mph, derailing 23 of the cars and causing $10 million in damage.  Round-the-clock repairs continue for months.
FEBRUARY 1957:   A Bridgeport man, running to catch a train, sees it pulling out of the station and chases after it.  Grabbing the door of the last car, he’s unable to board and falls to the tracks.
JANUARY 1958:     Within hours of each other, two locomotives catch fire in the Park Avenue tunnel, shutting down all train service in and out of Grand Central.
JULY 1958:             The AM commute is disrupted when 11 cars of a freight train derails near Bridgeport.


DECEMBER 1958:  Citing mounting losses, the New Haven RR threatens to eliminate commuter service unless it receives $900,000 from CT counties and gets NY to waive $1 million in taxes on Grand Central.  Railroad President George Alpert warns “I do not propose longer to peril the New Haven RR by subsidizing NYC, Westchester and Connecticut”.  (The NHRR goes into bankruptcy (for the second time) in 1961.)
at August 27, 2015 No comments:

“The Fairest (and Least Popular) Way To Pay for Roads”


Back in April I wrote about the challenge we face to pay for Gov. Malloy’s $100 billion transportation plan.  And I expressed sympathy for his bipartisan, blue-ribbon panel tasked with coming up with funding alternatives, the Transportation Finance Panel.
To be honest, I think that panel may be on a fool’s errand.  They’re trying to pay for a wish list of projects not of their making and many of which may not be necessary let alone affordable.  Maybe we only need $50 billion.  But it’s not their mandate to question our “transportation Governor”.  Someone else will have to do the “vetting.”
But even as the Finance Panel does its work, exploring all manner of funding options, they are being second-guessed by politicians and public alike.
How about tolls?  Too expensive… they’ll slow traffic… and don’t forget those flaming truck crashes at toll barriers!  (Not true… no they won’t… and there won’t be toll barriers).
Gas tax?  Unfair… out-of-state motorists won’t pay… improved gas mileage means dwindling revenue.  (Totally fair… maybe so… and absolutely correct).
Which brings us to what would seem to be the fairest, most equitable fund raising mechanism for paying for our roads, but which brought a bipartisan crap-storm of response when suggested:  a mileage tax, or VMT (vehicle miles traveled) tax. 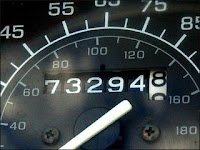 The concept is simple:  have each motorist pay a tax for the number of miles he/she drives each year.  The data could be collected electronically by GPS or with an odometer check when you get your annual emissions inspection.  You drive more, you pay more… whether you drive on I-95 or back-country roads.  Take mass transit, you’d drive less and pay less.
The VMT idea was discussed at the Finance Panel’s July 29th meeting, and the public and political reaction was immediate and universally negative.
Senate Majority Leader Bob Duff (D-Norwalk) called it “unproven”, despite successful trials in the Netherlands and Oregon and VMT’s endorsement by the US Government Accountability Office. 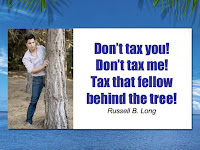 Republican St Senator Toni Boucher calls VMT nonsensical and an invasion of privacy, though testimony proved both claims wrong.
Face it:  nobody likes a tax that they have to pay.  Tax the other guy… the trucker, the
out-of-state driver, the real estate transferor… but don’t tax me!
Driving a car is not free.  Paying for gasoline is only part of the cost and even Connecticut’s relatively high gas tax comes nowhere near to paying for upkeep of our roads. Our deteriorating roads are a hidden toll as we pay for car repairs. 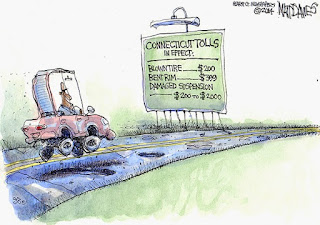 The Transportation Finance Panel will find there is no easy or popular solution to paying for the Governor’s $100 billion untested and unattainable wish list of projects.  Whatever they recommend, citizens will scream bloody murder and their lawmakers will vote it down.
But shame on reactionaries in Hartford for calling the VMT, or any funding alternative, “dead on arrival”.  Let’s at least let the Finance Panel do its diligence before saying they have wasted their time.
at August 16, 2015 1 comment:

PT Barnum Takes on The Railroads

What do Connecticut’s own PT Barnum and I have in common?  No, not just a love of circuses.  We are both “rail advocates” fighting for the interests of commuters.
This amazing piece of news about Barnum, a man better known for his showmanship and menageries, came to me while watching a speech at the Old State House in Hartford broadcast on CT-N (every policy wonk’s favorite channel).  The speaker was Executive Director and Curator of the Barnum Museum Kathleen Maher. 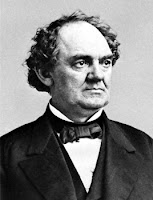 She explained that Barnum was more than a showman.  He was also a railroad advocate. (He also went on to be part-owner of a cross-Sound ferryboat service that’s still running today.)
In 1879 Barnum wrote an impassioned letter to the NY Times promoting a street railway be built in New York City along Broadway between Bleecker and 14th Street, enlisting the support of local merchants such as the Brooks Brothers and “the carpet men, W & J Sloan”.
Earlier, in 1865, Barnum went to Hartford representing the town of Fairfield as a Republican. (Later he became mayor of .)  As he writes in his autobiography, he arrived at the capitol to find that powerful railroad interests had conspired to elect a Speaker of the House who had protected their monopoly interests in the state.
Further, he found that ’s “Railroad Commission” had been similarly ensnared by the industry it was supposed to regulate and that one member was even a clerk in the office of the NY & New Haven RR!  Barnum pushed through a bill prohibiting such obvious conflicts of interest.

Then he turned his sights on helping commuters.  Barnum noted that railroad magnate Commodore Vanderbilt’s new rail lines (now the and divisions of Metro-North) were popular with affluent commuters.  Once Vanderbilt had them hooked as passengers for their daily ride into and out of NYC, he jacked up fares by 200 – 400%.
Sensing that Vanderbilt might try to do the same to Connecticut riders on the new New Haven line (in which “The Commodore” had a financial stake), Barnum set to work in the legislature to make sure the state had some control over “its” railroad.  Barnum said his only ally in the fight was then-State Senator Ballard of Darien.
So spirited were they in their lobbying that the railroad’s “man” on the state Railroad Commission “took to his bed some ten days before the end of the session and actually remained there ‘sick’” until the legislature adjourned.” (Sound familiar?)
Fast forward to the present and we could again use Barnum’s help.
Though Connecticut hires Metro-North to run “our” trains on “our” tracks, our contract with that New York state agency gives us little say and no seat on it board.  As one lawmaker noted, the CDOT defendsMetro-North much as a kidnap victim fights for its captor (what he called the Stockholm syndrome).
at August 03, 2015 No comments: