Summer Getaways Without the Traffic 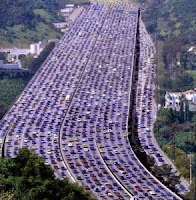 Watching the Friday afternoon traffic crawling up I-95, I was struck with a thought:  there has got to be a better way to get to the Cape and Islands than playing Mad Max on the bumper-to-bumper interstate for endless hours.
Six million people visit the Cape each year, four million of them in the summer and fall.  And on most summer weekends they all seem to be directly in front of you on the roads, right?  There’s got to be a better way.
There used to be a direct Amtrak train from Washington DC to Hyannis, stopping at major stations in Connecticut. “The Cape Codder” ran from 1985 to 1996 but only carried 1200 passengers in its final season due to its 5+ hour running time from Stamford.  And once you detrained in downtown Hyannis you were still miles from the beach.
There’s still express bus service running from New Haven to Hyannis but it’s no faster (though a lot cheaper at $42 one way). (All fares quoted are based on a June Friday departure)
The newest option is high speed ferry.  The Seastreak runs from East 35th Street in

Manhattan to Martha’s Vineyard ($165 one way) and Nantucket ($175 one way) in five and six hours respectively.  Nice boat, but still a long ride even with the flat screen TV’s, full bar and comfy seats.  .

Seastreak also operates high speed from New York to Port Jefferson LI where you can connect with the Hampton Jitney (bus) to that tony beach community in 3 ½ hours.  Or you can chug across to PJ from Bridgeport on the traditional ferry, and then hop the bus.
If money is no object, you could always fly.  JetBlue flies non-stop in an hour from JFK to Hyannis or the Vineyard for as little as $179 one way.
Or there’s Cape Air whose Cessnas will whisk you from White Plains to the islands in just over an hour for $565 one way.  Faster and more exclusive are charters from firms like Trade Winds whose fleet includes private jets.
Really?  Are we this desperate to decamp to the sun and surf when we have perfectly lovely beaches right here in Connecticut?

State-run Sherwood Island is right off I-95 in Westport and bikeable from the Greens Farms stop on Metro-North.  And Bridgeport’s city-owned Pleasure Beach reopens in June after a two decade absence.  The free water taxi runs seven days a week.
Another alternative is the Jersey shore.  Catch Amtrak to Newark (or Metro-North to Grand Central and switch to Penn Station) and NJ Transit’s “Coast Line” will easily get you to all the shore communities from Long Branch to Bay Head.
So wherever you’re heading for fun and sun this summer, don’t be a slave to bumper-to-bumper traffic.  Try transit!

Last time we were talking about mass transit systems collecting fares on the honor system.  This time, something completely different.  But to understand it, consider this analogy:
Let’s say you’re in a store shopping for a commodity.  You and another shopper each select one of the same items at the same time and head for the cashier.  But before you can pay, the cashier asks for your name and some identification.
You’re from Darien or New Canaan and a new customer.  The other shopper is from Hartford, but a regular at the store.  The cashier plugs in that info and you’re told that your purchase will cost 10% more than the other shopper’s.
What?  Well, welcome to the world of “personalized prices”.

You may not realize it, but this happens all the time when you’re buying gasoline, thanks to “zone pricing” where gas stations charge higher prices in more affluent communities, not just in Connecticut but nationwide.
And giving discounts to “best customers” is also quite common.  Monthly pass holders on Metro-North pay only half of what their peak fares would cost purchased separately.
But never before have these concepts been combined in some secret algorithm to apply to purchasing airline tickets… until now.

IATA, the International Air Transport Authority, has petitioned the US to allow its 250 members to capture and use new kinds of personal information about would-be flyers before quoting them a fare.
Most frightening of these could be some sort of “means test”.  In other words, as in a bazaar when the salesman sizes you up and asks “how much do you want to pay?” the airline would figure out that answer itself based on your zip code and flying patterns.
So if you live in a rich town, they’ll assume you can pay more and quote you higher fares while folks in poorer communities are offered discounts.
To his credit, our US Senator Richard Blumenthal along with others in Washington are questioning the fairness, if not the legality, of all this.  They’ve written to the US Transportation Department asking if this plan isn’t hurting more consumers than its helping.
Airline flights have never been fuller.  Because they’ve shrunk their fleets and customer demand has come back, almost 80% of all seats are full on domestic and international flights.
Gone are the glory days of my mis-spent youth when students could fly “stand-by” hoping

for an empty seat just before departure in return for a 50% discount. That only worked because planes were empty.

Today the incentive to get a cheap seat is to book early, weeks in advance, not to show up at the last minute hoping to find an empty seat.  There are none.
But to price the same seat bought at the same time at two different prices simply because of shoppers’ demographics seems unethical if not illegal.
Airlines are not allowed to discriminate on the basis of race, gender, national origin.  So why would we allow them to, in effect, look at our credit report before quoting us a fare?