Each year, billions of dollars worth of goods arrive on our shores by sea… oil, cars, electronics and food.  But how those shipments make their way to our ports is undergoing dramatic change in two significant areas.
The first is the Arctic Ocean, suddenly free of ice many summer months and open to traffic. Oil from Norway can now reach Japan by sailing “over” Russia rather than sailing through the Suez canal, a 40% time / cost savings.  And goods from China, the world’s largest shipper, can arrive in Europe cheaper and faster (by up to two weeks) by sailing the “Arctic Golden Waterway” rather than going through the Panama Canal.


Ironically, the Northwest Passage between Alaska and Greenland is not as accessible as the Russian waters.  Canada claims the waters to be their own while the US says they are international.
Of course, both Arctic routes depend on global warming and are only passable a few months each summer.  And both passages are very dangerous.  Though the seas may be free of ice, salt spray hitting the ships’ superstructure freezes instantly at -20 degrees.  If enough ice builds up, ships can literally capsize from the weight.
Not to be outdone, the Panama Canal is expanding in a $5.25 billion project approved seven years ago.  When completed, the wider and deeper channels and locks will handle vessels triple the size of the already enormous “Panamax” ships of today.

What does this mean for the US?  Plenty!
To handle the mega-ships, US ports need to be dredged and widened as well.  Almost $46 billion has already been spent for cranes, higher capacity train lines and deeper channels at ports like Jacksonville, Baltimore and, yes, even New York.
The Port Authority of NY/NJ is about to spend $1 billion to raise the height of the Bayonne Bridge to accommodate the taller mega-ships.  But environmental challenges may delay the project ‘til 2016 after the new canal opens.
US railroads are also gearing up.  While it used to be cheaper to ship containers to Long Beach CA and then carry them by rail across the US, the new Panama Canal may see those containers arrive on the east coast and be carried by train west.  American coal may find new markets overseas by being shipped directly to Atlantic ports for on-loading to ships.
But rail service between the Pacific and Atlantic is not limited to the US.  The governments of Mexico, Guatemala and Honduras are looking to build a dry-canal (railroad) between the oceans that may be cheaper to use than paying the tolls extracted for shipping through the canal.
And in Nicaragua, the Sandanista-controlled national assembly has backed a $40 billion plan for a Chinese company to dig a rival to the Panama canal.  But there are many who doubt it can be done or that its length, triple that of Panama, will be economically viable.
All of these efforts add up to one thing:  as the ships get bigger, the world gets smaller.

Posted by JIM CAMERON at Wednesday, August 28, 2013 No comments:

Progress Can Be Painful


I am nothing if not an optimist.  After toiling as a rail advocate for almost two decades, nothing surprises me or dissuades me.  A few examples…
This week Metro-North announced a new timetable, one so hastily launched that they won’t even have paper copies available ‘til after Labor Day.  Why the hurry?  Because this summer has been horrendous for on-time service… but with good reason.
Metro-North is justifiably proud of 98+% on-time performance record (give or take their 6 minute margin of error).  But long postponed and badly needed track work, especially in the Bronx, has screwed up everything since July 1st.  Trains, especially at rush hour, have regularly been 10+ minutes late as two of the four tracks are out of service. 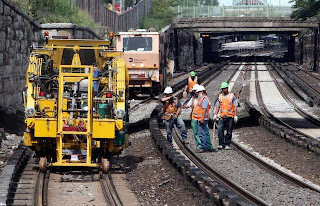 The solution?  A new timetable showing longer (more realistic) running times until the work is done.  Your train won’t run any faster, but you won’t be able to complain about being late, at least on paper.
At first this may seem like a self-serving trick, but in this case I think the railroad is right.
The track work is necessary.  If last May’s derailment in Fairfield taught us nothing it certainly showed the need for maintenance.  As I asked one fellow rider grousing about the delays, “what do you want… a fast ride or a safe one?”
The track work and slower running times will be in effect through the fall.  Let’s all be patient and let the railroad finish its work.
A huge plus for commuters is the recent opening of the West Haven station. After more than a decade and $130 million in expenditures, this gorgeous new station with 12 car-length platforms and 658 parking spaces will finally fill the nine-mile service gap between Milford and New Haven stations.  The station will serve 85 trains each weekday, 56 on the weekends.
The new station is proof that things can get better thanks to the actions of even one person.  Local businessman Michael Meruciano petitioned for this station starting in 2000 and single-handedly fought for its creation for more than a decade.  He deserves a medal for his perseverance, though every local, state and a few national politicians will likely take credit.
Speaking of which… we are still waiting for more news on the re-formed CT Rail Commuter Council, successor to the 26-year-old CT Metro-North Rail Commuter Council (on which I served as Chairman).  Governor Malloy’s proposal to revamp the Council became law this spring and called for the naming of the new Council’s members by August 1st.
I’m happy to report that I was the first member appointed (thanks to State Rep and Minority Leader Larry Cafero) and so far five other ‘old’ Council members have also been appointed.
The Commuter Council hasn’t met since last June (when our meeting was boycotted by Metro-North and the CDOT) and we’re anxious to get the new group up and running soon.
Only problem is, Governor Malloy and several other lawmakers have missed the August 1st deadline for appointing new members, leaving us in limbo.  Why the rush to reform the old Commuter Council if they can’t meet their own legislative deadline for appointing members to a new one?
Posted by JIM CAMERON at Monday, August 19, 2013 No comments:

Why All The Train Crashes ?

It’s been a rough few months for rail safety, with any number of horrific crashes and derailments causing death and injury around the world.
While the NTSB says it’s fast-tracking (no pun intended) its probe into the May derailment and collision of two M8-equipped trains on Metro-North, we’ll still have to wait until October for public hearings.
Meantime, one of Spain’s famous AVE high-speed trains literally flew off the tracks on a sharp curve, killing 79 passengers… two French commuter trains collided in a station… and the small town of Lac Megantique Quebec was turned into a deadly inferno when unattended tanker cars rolled down a hill and explode.  What’s going on here and what can be done to prevent these kinds of incidents?
I’m no expert on the engineering of railroads, so I’ve spoken to several people who are; what they’ve told me is both reassuring and frightening.
SAFETY:      Trains, whether passenger or freight, are still extremely safe.  When accidents occur, the damage can be horrific which makes for great television.  But the stats are that you’re four times likelier to die in a bus crash and 28 times likelier to die in a car crash than on a train.
STANDARDS:         US rail cars are manufactured to much higher safety standards than European or Asian trains.  The Federal Railroad Administration sets standards of survivability based on “crash worthiness” while the foreign systems aim for “crash avoidance”.  Of course that means our trains are heavier and less fuel efficient, especially at high speed.  But they’re built with crumple zones, like your car.

ACELA:        Amtrak’s Acela is hardly the fastest train in the world, but a former FRA member told me he thinks it’s the “world’s safest for crash worthiness.”  Before Amtrak ordered the bespoke train sets, they brought over a Swedish tilt-train (the X-2000)
and Germany’s ICE trainset to demonstrate the potential of high-speed trains between Boston and Washington.  I had a chance to ride both, but while they garnered great PR for Amtrak, neither of the trains (among the best in the world for the time) met US safety standards, then or now.
TESTING:     All new US rail equipment is put through rigorous testing at an FRA facility in Pueblo Colorado, a giant race track for trains.  Trains are tested for speed, acceleration and braking as well how they operate in extreme heat and cold.  Amtrak is now testing new locomotives at the facility prior to their deployment on the Northeast Corridor.
PREVENTING HUMAN ERROR:     When a train engineer is on the phone, texting friends or ignoring his professional duties, there should be technologies that can intercede.  After a fatal MetroLink commuter train crash near LA in 2008, the FRA mandated that all railroads install “Positive Train Control” by 2016.   The system of signals, sensors and automatic train controls will cost the railroads $22+ billion.  A former senior FRA official, speaking to me on background, said the system is a desirable goal but “completely unattainable” by the current deadline due to lack of money and technology.
TANKER CARS:     Unlike other freight cars which are owned by the railroads, tanker cars are owned by the shippers.  They often carry propane, chemicals and fertilizers, some of which can be lethal if spilled (anhydrous ammonia, chlorine).  Yet, because the railroads are “common carriers” they must carry these shippers’ cargoes, even though they have no control over the safety standards of the tanker cars carrying them.  As a former railroad official told me, “if these chemicals aren’t being carried by rail, they’d be on the highways”, where accidents are much more common.


Travel and transport by rail is already safe.  But we must have the will and find the ways (money!) to make it even safer.
Posted by JIM CAMERON at Saturday, August 03, 2013 No comments: