What’s the most mass-transit intensive city in the US?  By the numbers, New York City.  But for a glimpse of the real future of mass-transit,  the winner is clearly Portland Oregon!

Portland has only 632,000 residents but 2.3 million in its metro area.  Yet it has, per capita, what I think is the largest, most extensive and best integrated systems of light rail, streetcars and bike lanes in the nation. 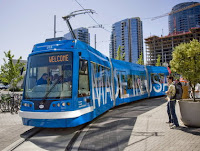 LIGHT RAIL:       It was 1986 when Portland opened its first light-rail line.  Today the system covers 60 miles (including the airport, 12 miles from downtown).  In 2001 a downtown streetcar system was added.  It proved so successful that Portland now manufactures streetcars for other American cities.

Like the city’s extensive bike-rack equipped bus network, all of Portland’s mass transit operates on the honor system:  you buy tickets before boarding and only show them if a inspector boards, looking for proof of payment.

To encourage ridership, fares are ridiculously cheap.  For $2.50 you can roam the system for 2 ½ hours.  An unlimited day pass is $5 or $26 a month (about the cost of a round-trip to NYC on Metro-North).  “Honored Citizens” (seniors, Medicare or disabled) get a monthly pass for $7.50!

DON’T EVEN THINK ABOUT DRIVING:      To further encourage use of the ubiquitous mass transit, driving in downtown is difficult and expensive.  The main transit corridors have one lane for streetcars, one lane for bikes and just one lane for cars.  Parking is really expensive, both by meter on the streets and in lots.  And yes, the freeways crawl just like in LA.

TECHNOLOGY:      The bus and rail system offers free apps for trip-planning which use GPS to tell you exactly how long you’ll wait for the next trolley, directions by line to your destination and expected travel time.  And yes, you can buy and show your ticket using your smartphone.

BIKES ARE KING:       The city’s unofficial motto is “Keep Portland Weird”, and the residents work hard to do so.  Outside of Europe or Asia I have never seen so many people on two-wheels traversing a community.

There are so many dedicated bike lanes that when a new bridge was built crossing the Willamette River, the bridge was built for everything except cars and trucks:  a mass transit-only bridge!

When a new Medical Center was planned on a downtown hill, designers realized it would be foolish to waste land on parking, so they built an aerial tram from unused industrial land on the waterfront.  Hospital employees and patients alike take light rail or bike to the base station (where a free 400
space bike-lot is usually full) and are skyward in minutes.


So if you are ever disillusioned by the sorry state of mass-transit in our area, take heart.  The future is now in Portland!
at July 16, 2016 No comments: