The fall campaign has brought a welcome discussion of the state’s transportation woes, especially getting mass transit back into a state of good repair.  But gubernatorial candidate Tom Foley says he thinks the real issue isn’t the trains and buses but highway congestion.  Yet, he offers no solutions, saying only “we’ll figure it out.”  Really?
Tom, if there were easy answers, they’d have been implemented by now.  Look… this is really a matter of supply and demand: too much demand (highway traffic) and not enough supply (spaces on those roads).   I think the solution is in managing the demand.  But Foley says it’s a “supply side” issue.
So here are a few of the crazier ideas for fixing traffic I hope he does not embrace: 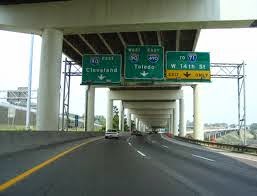 1)    DOUBLE-DECK I-95:        Seriously, this was once proposed.  Can you imagine the decades of construction and billions in cost, with “upper level” roads having to soar hundreds of feet over existing bridges.
2)    ALLOW TRUCKS ON THE MERRIT PARKWAY:       There are two words to explain why this can’t happen:  low bridges.
3)    BAN TRUCKS FROM I-95:          Trucks are high-occupancy vehicles delivering goods to the stores that you, in your single-occupancy vehicle, drive to so you can shop.  No trucks, no goods, no shopping.
4)    DRIVE IN THE EMERGENCY BREAK-DOWN LANE: This was Governor Rowland’s idea and he even wasted a million dollars studying it.  But if you think of that far right-hand lane instead as the “emergency rescue lane” you’ll see why this doesn’t make sense.  This plan would also require re-striping traffic lanes to a narrower width, making driving more dangerous.
5)    WIDENING I-95 TO FOUR LANES:       Again, billions in cost and decades of construction.  And if you build it, they will come.  Traffic will expand to fill available space.  Then what, a fifth lane?
I think there are better ideas for managing congestion, some of them already being implemented:
OPERATIONAL LANES:     Adding a fourth lane from on-ramps to off-ramps gives traffic a better chance of merging on and off the highway without blocking the through-lanes.

WIDENING CHOKE-POINTS:      For example, the exit 14-15 mess in Norwalk.  But this $42 million construction project, discussed since 2002, has been under construction for more than two years and it’s still not done!
MANAGE DEMAND WITH TOLLS:       Tolls are coming, as I’ve predicted before.  And with time-of-day pricing they’ll not only raise badly needed funds but also mitigate demand.  Those who absolutely must drive at peak hours will pay for the privilege and get a faster ride as those who can wait will defer their trip.  We have peak and off-peak fares on Metro-North, so why not on highways.

ADD A ZIPPER LANE:      Sure, this may require highway widening, but just one lane that’s reversible depending on demand, a system that’s long been in effect on the Tappan Zee Bridge.

As I say, there are no simple solutions to highway congestion.  So when any candidate says he or she has one, be skeptical.  It’s easy to identify the problems.  But fixing them will always be expensive.