The Best High Speed Rail in the World: China!


Last column I spoke of riding Japan’s Shinkansen, the oldest true high-speed rail (HSR) system in the world.  This week, the story of the newest and biggest HSR… China.
Much has been written of the tragic accident in July 2011 when two Chinese trains collided killing 40 and injuring almost 200.  A recent New Yorker article detailed the incident as an example of shoddy Chinese engineering and political corruption, which it was.
But that incident notwithstanding, in less than a decade China has built the biggest and best HSR network in the world, and it only cost a quarter trillion dollars.  I just had to ride it, and did last month.
Our train from Beijing (population 19 million) to Shanghai (23 million) covered the distance of 819 miles in five hours.  That’s an average speed of 164 mph.  Even Amtrak’s Acela takes 6 hours and 40 minutes to sprint from DC to Boston, a distance of only 448 miles, or an average speed of less than 70 mph.
Acela carries 300 passengers on one train per hour.  The Chinese HSR carries 1,050 passengers per train and offers four to six trains an hour.
Acela rides on improved track on a 100-year-old right-of-way with tracks mounted on ties sitting on rock ballast.  The Chinese train rides a dedicated right-of-way with tracks affixed to a cement roadbed, like a highway.  The smoothness of the ride was amazing.
This single line between Beijing and Shanghai was estimated to cost $32 billion, but it’s anyone’s guess what the real cost was, given the rampant corruption. But to my Western eyes, it’s amazing what a totalitarian regime can do, unencumbered by environmental impact studies and private property rights.  This is truly the best HSR in the world.
While in Shanghai I also rode the world’s only commercial maglev train:  not steel wheels on tracks, but a magnetic floating train on a guideway.  The line is only 19 miles long, running from the airport to the southern edge of the city.  But at full speed of 268 mph (which my run did not achieve) the Shanghai Maglev is the world's fastest train in regular commercial service… faster even than the Chinese HSR. 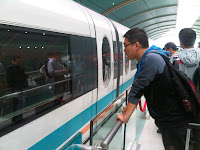 Oh, it was fast.  But it wasn’t smooth.  And running only to the edge of the city and not downtown, it is ridden mostly by tourists and rail fans.  The few passengers on our mid-day run were all in the second class cars.  Why pay for first class on an 8 minute ride?
The builder, Transrapid, pretty much gave away the construction for just $1 billion, to use the Shanghai system as a showcase of the technology.  Though a 34-mile extension from the international airport (Pudong) to the domestic airport (Hongqaio) is planned, that’s about all we can expect.
Maglev is interesting, but its incompatibility with existing tracks and the requirement for its own dedicated, unique tracks make the technology unattractive, especially given the advances in conventional railroading.
What can we in the US learn from China’s great leaps forward in railroading?  Not much, aside from what is possible technologically.  In this country we have neither the will nor the money to ever build such a railroad.
In transportation at least, China is the future.  The US is a third world nation.
Posted by JIM CAMERON at Monday, November 19, 2012 2 comments:


I am just back from two weeks’ travel in Asia where I have seen the past and the future of the world’s best high speed rail.  This week, my thoughts on Japan and next week, China.
It was 1964 when the Japanese introduced the world’s first “bullet train”, the Shinkansen.  Using a dedicated right-of-way (no freight, no slow trains), the Tokaido line between Tokyo and Osaka today carries over 150 million passengers a year at speeds up to 190 mph… not the fastest in the world, but easily the busiest.
Now on its seventh generation of equipment, I rode the Nozumi Express from Tokyo to Kyoto and was amazed at the service.  Like Grand Central Terminal, Tokyo’s main downtown station is a dead-end.  As trains arrive, passengers disembark and uniformed cleaning crews have about ten minutes to clean and freshen the equipment for the next run.
The Nozumi runs from Tokyo to Osaka, a distance of 314 miles, equivalent to the distance between Boston and Baltimore.  And it makes that journey in 2 ½ hours with trains every five to ten minutes!  Each 16 car train can carry up to 1300 passengers in first (“Green”) class (two by two seating) or second class (three by two… the Japanese are small).
Compare that to Amtrak with hourly Acela service in six car trainsets holding 300 passengers total.  Acela’s fastest run from Boston to Baltimore is just shy of six hours with an average speed of 90 - 120 mph. 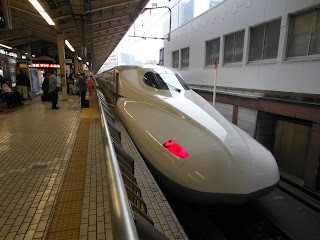 The Japanese trains are so fast there is no need for a diner or bar car.  Instead, passengers can buy an “ekiben” boxed lunch from dozens of stores at the station.  Because all seats are assigned, passengers que up at the exact spot on the platform where their car will stop, awaiting permission to board.  When the cleaning crews finish, the doors open, passengers board and the train departs… always on time, and to the second.
As the conductor collects tickets, he bows to each customer.  Train crew passing through the cars always turn and bow to the passengers before going to the next car.  The ride is so smooth as to not be thought possible.  And arrivals and departures are to the second with average dwell time at intermediate stations no longer than 90 seconds.  And, of course, there is free Wi-Fi during the entire journey.
The first class fare on the Nozumi Express between Tokyo and Osaka is $186.  On Amtrak’s Acela, the Boston to Baltimore ride costs up to $279 for business class, $405 in first class.
Japan’s Shinkansen is the grand-daddy of high speed rail, but still among the best.  Next time I’ll tell you about the newest, and to my thinking, the world’s best high speed rail… in China!  And I’ll recount my 11 minute ride on the world’s only commercial maglev in Shanghai.
Posted by JIM CAMERON at Monday, November 05, 2012 No comments: