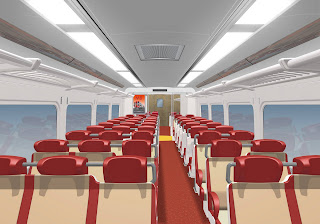 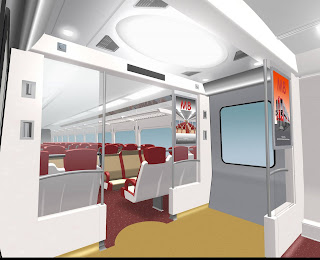 Some people say I’m a curmudgeon with never a nice thing to say about Metro-North or the CDOT… always complaining… too negative. Well, this column will change your mind. I have seen the designs for our new M8 cars on Metro-North and I’m ecstatic!

Much of the credit goes to renowned designer Cesar Vergara, who has commuted for years from and recently spent many months riding the Harlem and line cars to learn from their successes and mistakes.

From the outside, our new cars will look much like those M7 cars running in and on the LIRR. But on the inside, it’s all first class… though it’s still two and three seating. The color scheme is deep burgundy and rich cream with frosted silver and aluminum.

The windows are bigger. The overhead baggage rack has a soft, scalloped look. The lights run the length of the car and are offset by oval accents in the vestibules. The floors are a non-skid rubber made in .

There are single leaf doors instead of doubles. An overhead LED displays the next stop, complimented by an automated PA system. The crew can talk to each other on their own intercom and there’s a separate intercom for emergency use by passengers to contact a conductor.

Yes, the seats are still two on one side and three on the other, but they look much more comfortable. Covered with naugahyde, each seat has its own headrest with airline style winglets to stop snoozers’ heads from landing on a neighbor’s shoulder. Between the headrests are grab bars to assist getting in and out. And wonder of wonders, the seats have an extra inch of “pitch”, or distance from the back of the seat to the next one. They will be soft, but not bucket-style as we now have.

The new M8’s will have vacuum toilets capable of holding five days of effluent, though pump-outs are promised more often… i.e., they shouldn’t stink. And thanks to requirements, they’ll be roomy too!

Each train set will be equipped with GPS so it will always know where it is, as will the control room. Space is being built for the addition of WiFi gear, but none is planned for now pending a study with Amtrak.

Despite earlier plans to have cars share power conversion duties (with one car being powered by third rail and its mate fed by overhead catenary), all cars will now have both third rail and pantographs, but be permanently coupled in “married pairs”. New cars cannot run in train consists with the older M2’s, M4’s and M6’s.

AC traction motors will offer speedy acceleration and convert braking energy into generation of electricity to be fed back into the overhead wires. Because the new cars are heavier and there will be so many of them (300+), Metro-North and CDOT are worried about whether the existing power infrastructure can handle the load. (When the M7’s were first added to the division major upgrades to the power grid were needed).

The first eight cars will arrive in “early summer” 2009 for testing and acceptance by the end of that year. They’re being manufactured by in, of all places, . Despite fears to the contrary, CDOT promises that the M8 maintenance facility will be finished by the time the first cars arrive.

Commuters can watch for a seat-drop in coming weeks with pictures and a chance for some final input on the design.

I heard that these trains, unlike previous generations, will also be able to run on the Amtrak line over Hells Gate and into Penn Station. Can anyone confirm this? Thanks.

At least in theory they'll be able to run anywhere in the Northeast Corridor.

There is a slight problem transitioning from the Hells Gate bridge to the LIRR at "Harold" where the LIRR's third rail offers power to shoes riding on top of that rail... and the M8's shoes are used to getting third rail power by riding under the rail. But MNR and CDOT say they can come up with a spring-mounted shoe that will work in both areas.

Any plans (or should I say hopes) for the carriage of bicycles on the new M8s?

Does anyone know if there will be an M8 bar car.

Why would they need adjustable shoes if they can just run Panto all the way into NYC and onto the NEC? Just because they enter the Harold area doesn't mean they have to leave Pantograph.

When they run over Hell Gate and into the Harold territory they don't need to join Third Rail Power. From Harold Westbound Panto is supplied for all rails. This is primarily to get NJT and AMT trains to Sunnyside and to Boston. The shoes could have some stowing system when entering this area, so as not to interact with LIRR's power.