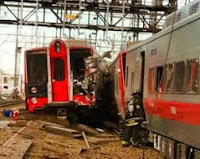 The recent derailment and collision of two Metro-North trains in Fairfield left dozens injured, tens of thousands inconvenienced and taxpayers footing the bill for millions of dollars in repairs.  It also proved just how fragile our rail network is, as this accident severed the crucial Northeast Corridor connecting Boston and Washington. What lessons can we learn from the incident?

Early indications are the derailment was caused by faulty track repairs.  But this incident is tied to the larger overall problem facing not only the CT Dept of Transportation but our entire nation:  deferred maintenance.

Our CDOT Commissioner James Redeker, a very talented man of highest professional integrity, has been warning us for years that we have worn-out roads, bridges and rails needing repairs or replacement.   But the Commissioner also claims, correctly, that he doesn’t get enough money from the legislature to do what’s needed.  Metro-North President Howard Permut has said the same thing, pretty gutsy for a state vendor, which is what Metro-North is.

It took the collapse of the Mianus River Bridge 30 years ago to finally get attention to the under-investment by the state in bridge inspections and repairs.  And to this day, 35% of the CDOT’s annual budget pays off bonds issued after that tragedy to get the deferred maintenance back up to speed.

So, in a state that seems to lurch from crisis to crisis before things change, I’d predict we’ll end up asking our grandchildren to pay the bonds we will now issue for repair work to get our rail infrastructure back up to “a state of good repair”.

Investing in mass transit can be sexy.  Just look at our M8 cars.  Every commuter I know loves them and sees them as proof that Hartford cares about commuters.  But as they look out their train window on the way to work, do passengers have any sense of how old the rails or catenary (overhead power) wires are?  Some are 100 years old!

Amtrak owns, operates and maintains the entire Northeast Corridor from Washington DC to Boston, all except for the section in Connecticut from the NY State line to New Haven.  That track is owned by Connecticut and maintained for us by Metro-North.  Connecticut pays 65% of the cost, the MTA (parent to Metro-North) pays 35%.  Amtrak and the Federal government kicks in a little money, but clearly not enough.

Ride on Amtrak in Rhode Island or New Jersey and your Acela will hurtle along at 140 mph.  In Connecticut, America’s fastest train runs no faster than Metro-North, about 70 mph.  Our roadbed, bridges and signal system can’t support higher speeds.
It’s probably a good thing Connecticut owns this right-of-way, giving us the authority to prioritize our commuter trains (carrying 1000 passengers apiece) over Acelas (carrying 300).  But that ownership comes at a high cost that we have not been paying:  spending on non-sexy things like replacing tracks and ties.

If we want to run a safe, reliable railroad we must pay to maintain it.  Perhaps the biggest lesson of the Metro-North accident is to re-prioritize our spending on infrastructure.  Not sexy, but very important.