Fire On The Train 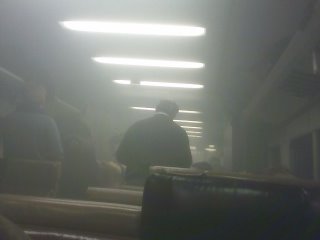 It was a typical Thursday, mid-afternoon, when Metro-North train #1540 pulled out of Grand Central on time at 3:34 pm, heading for New Haven. But this train’s journey on January 26th was to be anything but normal.

As recounted by an eye-witness, here is what happened.

Snaking its way through the underground yards, the train moved toward the Park Avenue tunnel when passengers in the fourth car of the eight car train started smelling smoke. Though they didn’t know it, a traction motor on the 1994-built M6 car, one of the newest in our aging fleet, had caught fire.

There were no flames, but there surely was smoke, not only in the fourth car but the three others that followed it. As that smoke grew thicker, being pumped into the cars by the ventilation system, passengers started coughing… and looking for help.

Because there is no intercom system on our trains, one of the passengers reached up to the ceiling and pushed the conductor buzzer system used to communicate with the motorman driving the train. A voice came over the PA system and, rather than explaining the smoke condition and what was being done to get help, told them to “lay off of the buzzer!”.

By now the train had stopped, still underground. A conductor moved forward, looking to trip the circuit-breakers for the burning motor and to shut off the HVAC fans still pumping acrid smoke into the cars. When that was finally accomplished, passengers were told to “move forward” to the unaffected cars. The train continued north through the tunnels to 125th Street.

Finally arriving at the above-ground station eight minutes later, the doors opened and the train was evacuated. Another train was dispatched from GCT to pick up the stranded passengers and they continued on their journey. There were no injuries but lots of rattled nerves.

This is at least the third such fire on Metro-North New Haven line trains in recent years. None got much publicity. Were it not for an eye-witness to this fire (who was also equipped with a cell-phone camera) who contacted the Commuter Council, this incident might never have gained attention. (Metro-North initially told me they had no reports of a fire… but there had been a “smoke condition”. Well, where there’s smoke…)

It will be at least two to three more years before our new M8 cars are in service, so what do I say to commuters who ask: Is it safe to ride Metro-North existing fleet of 30+ year old cars? What if this smoky fire had been a terrorist attack? Was “lay off the buzzer” the best the railroad could say to panicked passengers in a smoke-filled car? Will there be more such incidents, and if so, how can we handle them better?

The Commuter Council will be following up on this case with the authorities, and I’ll let you know what we find.

JIM CAMERON has been a commuter out of Darien for 14 years. He is Vice Chairman of the CT Metro-North / Shore Line East Rail Commuter Council, and a member of the Coastal Corridor TIA and the Darien RTM. You can reach him at jim@camcomm.com or www.trainweb.org/ct . For a full collection of “Talking Transportation” columns, see www.talkingtransportation.blogspot.com
at January 28, 2006 2 comments:

Our obsession with automobiles is not only creating gridlock and ruining the quality of our air, but its eating up our real estate and sending land costs upward. Because, once we drive our cars off the crowded highways, we assume it’s our constitutional right to find “free parking”.

For decades, city planners and zoning regulations have shared with Detroit in a conspiracy to deliver on that dream. Consider the following:

According to the industry standard-setting Institute of Transportation Engineers, there are 266 kinds of businesses which should be zoned to require a minimum amount of parking. Quoting from the ITE “bible”, convents must have one parking space for every ten nuns in residence. Hello? The residents aren’t going anywhere! Why do they need parking? Couldn’t the convents find better use for their land?

Or consider hotels. Why are parking regulations based on requiring enough parking for the few nights each year when the hotel is sold out, rather that the majority of nights when occupancy is 50% or less? Would we require a movie theater to require parking for an every-seat-filled blockbuster when its more typical offerings fill far fewer seats?

Just drive up the Post Rd and see for yourself. Due to zoning regulations, many shopping malls devote 60% of their land to parking and only 40% to buildings. Imagine what that does to the costs of what they sell.

Desperate to attract folks back to their decaying downtowns, some cities are putting more land into parking than to all other land uses combined. A Buffalo City Council member commented a few years ago: “There will be lots of places to park. There just won’t be a whole lot to do there.”

In his new book “The High Cost of Free Parking”, UCLA’s Donald Shoup recounts the following tale of two cities:
Both San Francisco and LA opened new concert halls in recent years. The one in LA included a $10 million, six story parking garage for 2,100 cars. In San Francisco there was no parking built… saving the developers millions. After each concert, the LA crowd heads for their cars and drives away. But in San Francisco, patrons leave the hall, walk the streets and spend money in local restaurants, bars and bookstores. Guess which city has benefited most from its new arts center?

Why are Connecticut towns slaves to antiquated zoning mentalities that assume all humans come with four tires rather than two legs? Why do we waste precious land on often-empty parking spots instead of badly needed affordable housing?

Clearly, our transportation planners need to work much more closely with economic developers to rethink what it is that we need in our cities and towns. We have become mindless slaves to car-obsessed planners for whom no vista is better than miles of open asphalt, be it highways or parking spaces.

The Lessons of California

While we all love to mock what passes for traffic in California, the Golden State is making progress in improving its transportation mess and may even give us a few ideas. Consider the following, which I recently observed on a trip west:

1) Commuter Rail & Amtrak: The trains are full, schedules are frequent and ridership is still climbing. Clean, modern, low-cost commuter trains in the LA area are so popular the operating agency is scouring the country looking for used rail cars to add to their fleet. Maybe they’d like some of our used Virginia cars, still sitting idle on a siding in New Haven?

2) Trolleys: You can now get from Long Beach to Pasadena by trolley, not to mention the subway from downtown to Hollywood. The trains are fast and gaining in ridership. In San Diego, the trolley now has three lines, including the popular run to the Mexico border. Cars crossing back into the US wait up to two hours to clear Customs while pedestrians cross in ten minutes.

3) Freeways: Yes, they’re crowded, but they’re well signed and drivers obey the traffic rules. Best of all, there are few trucks in rush hour as they are offered incentives to move their goods at night.

4) Electric Cars: No longer are big muscle cars or exotic foreign sports cars the prestige ride. Now, its electric cars. Not only is the gas mileage better but they get priority parking spaces and can travel in car pool lanes with only one passenger.

5) Traffic Information: In the San Francisco Bay area, you can dial 511 on any cellphone and get instant traffic information. Tell the automated system your starting point, destination and desired route and you’ll get the latest information on travel times and any delays. Connecticut lawmakers have been calling for a similar system here for years, to no avail.

6) Reversible Lanes: San Diego has had reversible rush-hour lanes on some freeways for more than a decade… in-bound in the AM, outbound in the PM. We have nothing similar in Connecticut.

7) Toll Roads: Not all freeways are free. Some of the most heavily traveled roads in LA are private toll-roads, by-passing the free interstates. Fares are collected electronically without stopping and can be changed, depending on demand. While “value pricing” is already in effect in New Jersey and on the George Washington Bridge, we in Connecticut don’t yet have the political will to embrace this solution to our highway mess.

8) Air Quality: Despite the immense number of cars on the roads, stiff environmental regulations, in place for many years, California has significantly reduced air pollution. Many days the air is cleaner in LA than along I-95 in Stamford.

All is not perfect in the Golden State. And their 12 lane freeways are not a solution I’d suggest we consider. But next time you joke about “LA style traffic”, think twice. Pretty soon they’ll be joking about us!