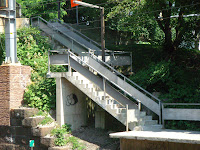 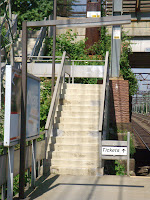 Three years ago, the Commuter Council launched the “Fix My Station” campaign, calling on Governor Rell to fix the crumbling, dilapidated and often-times dangerous conditions at CDOT-owned rail stations from New Haven to Greenwich.

Commuters sent in dozens of photos of their stations showing exposed wires, mold and graffiti which we posted on our website. Months later, CDOT finished a careful station by station engineering analysis recommending not just repairs but improvements. Special funds were allocated by the legislature for the needed work. Then… nothing happened.

Once again, we’d identified a problem, studied it and issued reports… and assumed the job was done. Few, if any, repairs were ever made to stations. If we were to revisit the same stations today we’d find things little improved.

But then, along came the Federal government this year with its “stimulus money” to create jobs with “shovel ready” public works projects.

Regional planners moaned, caught in a classic “Catch 22”. Because they had not been allowed for decades to plan for work that wasn’t already funded, there was little work that was truly “shovel ready”… except, in Connecticut’s case, at the train stations.

Here’s what happened at one station… Noroton Heights in Darien… but is doubtless being replicated across the country with similar public works projects.

One of the problems indentified at Noroton Hts as far back as 2004 was two sets of crumbling concrete steps leading from the west end of each platform up to Hollow Tree Ridge Road. Each set of stairs contains 28 steps.

Town officials initially estimated the repair work would cost $225,000, and the repairs were ordered, pending accumulation of enough money from parking revenues from commuters to pay for them.

Then the CDOT got involved. Because the steps were close to the track and overhead catenary power lines, CDOT said that Metro-North “flag men” would be required to oversee the repair work. That would add $80,000 to the job.

Because of the delays and since building supplies were then in such demand, prices escalated and the final bid for the work topped $400,000.

Then, along came Uncle Sam. When the feds dumped billions onto the states, somehow Hartford decided that $1.6 million should be spent at the Noroton Heights rail station. This would mean that in addition to fixing the steps, platform canopies could be extended and the platforms themselves could be resurfaced… projects long dreamt of but never put to paper by planners.

But be careful what you wish for.

Because Federal funds were now involved, CDOT had to revisit the stair rebuilding to be sure the work met Washington’s standards, not just Darien’s or the state’s.
Now, $30,000 will go to CDOT just to administer the project. But because CDOT is now under-staffed thanks to recent layoffs and early retirements, they can’t administer the job. The work is delayed again and the stairs probably won’t be repaired until 2010, six years after they were first identified as needing the work.

Had the Federal stimulus money gone directly to the towns, work would probably be underway by now. Heck… with a crew of Boy Scouts, a few sledge hammers and some local contractors, the steps could have been fixed in one week summers ago!
Instead, the steps are still crumbling. Federal funds are not being spent. Jobs have not been created. And another summer construction season will probably be wasted.

The “Fix My Station” campaign seemed like such a great idea three years ago, but those were simpler times and I was probably naïve to think anything so important could ever be done so quickly and easily. After all, this is Connecticut.
at July 18, 2009 No comments:

Getting To The Airport

They used to say that “getting there is half the fun”. Whoever “they” were, they haven’t endured the challenges and indignities of air travel post-9/11.
Even getting to the airport can sap your strength, if not your wallet. Consider the alternatives.

A car service is certainly convenient. But at $160 one way to LaGuardia’ $170 to JFK and $200+ to Newark, getting to the airport can cost more than your air fare. (Mind you, these are the advertised rates, so I wouldn’t be shy about asking for promotions and discounts when you call to book.)

But car services aren’t just expensive, they’re also wasteful. Couldn’t solo travelers share a car with others in a “limo-pool”? Is one passenger in a Lincoln Town Car an efficient use of limited space on I-95?

How about Connecticut Limousine? Now there’s a misnomer! Since when is a bus or cramped van a limo? And try explaining that name on the receipt on your expenses to your company’s accountant. “Really boss… it was just a bus!”

On a few occasions I’ve actually rented a car at the airport, driven home and then dropped the car the next day in Stamford. A day’s car rental is about half the cost of a car service. OK… so call me cheap.

Some regular fliers hire neighborhood teens to drive their own car to the airport, drop them off and drive home, repeating the process on their return. That’s cheaper than a car service, but puts double the miles on your car.

My preferred airport transfer is in my own car. Airport parking is $33 a day. Not cheap, but certainly convenient. And nobody complains about my cigar smoking enroute to the airport.

Another alternative, believe it or not, is Metro-North. Get off at 125th Street and catch a cab or livery and you’re at LaGuardia in about 15 minutes. Future plans call for some Metro-North trains to travel over the Hell’s Gate bridge, through Queens and into Penn Station. That could be a great chance to add a LaGuardia station with shuttle bus service to the terminals. But it’s a rail link our kids might see in their lifetimes, not ours.

If you’re heading to Newark, definitely consider Amtrak. Most Northeast corridor trains stop at Newark Airport where a convenient connection to the airport monorail has you at the terminals in just minutes. The train sure beats the Cross-Bronx and GWB any day. And fares are as low as $23 one way.

The proponents of ferry service on Long Island sound keep tempting us with talk about direct water-borne service to LaGuardia, but I’ll believe it when I see it. The old Pan Am Water Shuttle (a high speed ferry) couldn’t make a go of it carrying expense-account business fliers from the Marine Air Terminal to midtown, so I’m skeptical that operators could fill ferry boats to Stamford and Norwalk. And do you really want a sea cruise in the winter?

Mind you, New York’s three airports aren’t the only choices. Westchester County airport offers non-stop jet service to many cities and offers a variety of major carriers including JetBlue. Bridgeport’s Sikorsky airport used to get you to such cities as Philadelphia and Newark, but service now is very limited and expansion of both of these airports is challenged by local residents. Hartford’s Bradley Airport offers another alternative, including low fare carriers like Southwest… if you don’t mind a two-hour drive to get to the airport, north of Hartford.

One reader extols the virtues of New Haven’s Tweed Airport where US Air flies to Philly where you can connect to most anywhere.

Clearly, the trip to and from the airport can start and end a trip on a very sour, and expensive, note. But with a little imagination, this summer’s vacation can end on a thriftier note.
at July 07, 2009 2 comments: