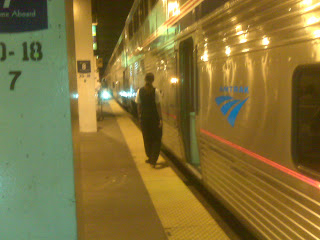 A few weeks ago I wrote about the miseries of air-travel, pledging to do all I could to avoid the “not-so friendly skies”. Well, being a man of my word, I’m writing this column en route to LA by Amtrak on “The Southwest Chief”.

’s Union Station is a busy place on the Saturday of my departure on Amtrak’s crack train to KC, AZ and LA. Amid the bustle of downtown-bound suburbanites entering the station off METRA commuter trains, an opposite flow of older “land cruisers” gathers in Amtrak’s Metropolitan Lounge for my and other trains all leaving within hours of each other.

At the boarding call is made for our nine-car train: two sleepers, a diner, a glass-walled and ceiling observation car, three coaches, a crew dormitory and a baggage car. We board and settle-in. I’m in a deluxe bedroom with plenty of seating, a wash-basin and WC (which doubles as a shower). Located upstairs on this bi-level Superliner, I also have two windows.

Firing up my radio scanner I hear the conductor proudly announce an on-time departure at 3:15 as my sleeping car attendant offers me complimentary juice and coffee and the dining car chief, Moses, give me a 6:30 reservation for dinner.

Coach fare from to LA rivals the airlines, starting at $146. Mind you, it is a 31+ hour journey. But the bedroom costs another $1,034 under Amtrak’s new policy to allow demand to meet their limited supply of accommodations. Good for them, say I, though my ticket is free. Zip. Nada. A free ticket to ride 2256 miles, including all meals.

Thanks to their frequent rider program, Amtrak Guest Rewards, my many jaunts on Acela between and have added up to this free trip. How sweet!

As we roll thru rural , , and I play a game of trying to figure out where we are, looking for names on water towers and passing highway signs. These hamlets are small town at its best. Kids gather near the tracks and waive as we roll by. I wave back.

As I have dinner on disposable plastic plates in the once-proud diner (hot food is only prepared on ”The Empire Builder”, the rest is nuked), the sleeping car attendant makes up my bed. A couple of Tylenol PM’s assure a good night’s sleep despite the rocky roadbed. brings us to . Later, , and finally .

One of my favorite reasons to travel is meeting folks I’d never encounter otherwise. Like the lady from LA returning home from after a round-trip on the Queen Mary. “I never fly. Ever,” she says with pride. Or the retired engineer from a railroad family who knows ever town on the route. “Over there’s an old TB Sanitarium,” he says, adding “It’s still used by the Feds”. We joke about renaming this town in the middle of nowhere and hypothesize about the nationality of the current “guests”.

If you really want to see our great country and meet some true Americans, get out of that middle seat in coach and try taking the train. Getting there is more than half the fun.

JIM CAMERON has been a resident for 15 years. He is Chairman of the Metro-North Commuter Council, a member of the Coastal Corridor TIA and the Darien RTM, but the opinions expressed here are only his own. You can reach him at jim@camcomm.com or www.trainweb.org/ct