Traveling By Tube (And We Don't Mean In London)


Will the train of the future be a high-speed tube, not a railroad?  That’s inventor and entrepreneur Elon Musk’s and others’ vision.  And Musk, the man who brought us the Tesla (all-electric car) and SpaceX (for-profit space rocket company) is putting his own money behind a proof-of-concept project for what he calls Hyperloop.


The concept sound simple:  move passengers in a sealed tube through a series of giant pipes propelled by air pressure at speeds up to 700+ mph.  That would mean a trip from New York to DC would take 20 minutes.

But this is not a new concept.  In fact, the first experimental “subway” in New York City, Alfred Beach’s “Pneumatic Transit” proved back in 1870 that it would work.  Despite political opposition Beach secretly built a 300-foot-long subway under Broadway near City Hall, offering daring passengers a round-trip ride in the system’s only railcar, pushed and pulled by air.  The system ran for almost 3 years and carried over 400,000 riders, 11,000 alone in the first two weeks.  The fare was 25 cents (equivalent to $18 today). Competing elevated railroad owners eventually won the City’s franchise and Beach’s system was abandoned.

Hurtling through a tube may be fine for mail, but what about humans?  As a recent article in Smithsonian Magazine points out, the psychological factor of being enclosed in a sealed tube, traveling 700+ mph, is not that much different than flying in a jet…  maybe just a bit more claustrophobic.

Whether by train or plane, I always like to look out the window.  Seeing where we’re going is half the fun, even on a familiar route.  But wrapped in a metal tube inside a giant pipe afford no views at all.  Riding 31 miles in the Chunnel under the English Channel takes 20 minutes at today’s speeds, and that’s more than enough time for me, thank you very much.

Of greater concern are the propulsion methods and the sheer physics of accelerating and braking from near-supersonic speeds.  But the biggest challenge of all would be where to locate the “pipes” and how to acquire necessary land.
Like high-speed rail, it would make no sense to follow the median on Interstate 95 or the Metro-North / Amtrak rights of way with all their twists and turns.  And anyone crazy enough to invest in any project along the coastline with the inevitability of rising sea levels should probably think pontoons, not pipes.

It will be interesting to see if Musk’s and others’ Hyperloop concepts get off the ground (pun intended), but I don’t expect to ride such a system any distance in my lifetime.

Good News (and Bad) for Metro-North


It’s been a rough few years for Metro-North what with derailments, crashes and commuter deaths.  But it finally seems like service and safety are coming back. 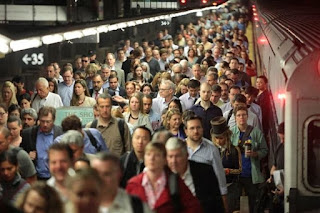 The best metric of that is the recent surge in ridership, up 1.7% compared to last year.  That works out to more than 3000 additional riders every day!
Certainly this ridership gain is a sign of more people finding jobs, but with gasoline prices near a record low, there’s a reason these folks are training instead of driving:  they like what they see.
The trains are 96% on time.  Yes, running slower than in years past, but what’s a few minutes if it means better safety?  What matters most is that the 7:37 shows up at 7:37, plus a minute or so, and arrives pretty close to on-time.  It’s much more dependable than last winter.
There have been no fare increases (at least in Connecticut), even though our fares are still the highest in the nation.  And off-peak and weekends, it’s a lot cheaper.
There’s more service too:  at least two trains per hour, even in off-peak.  That means more options.
And we have the spiffy new M8 railcars, at last.  Riders seem to like the clean, modern 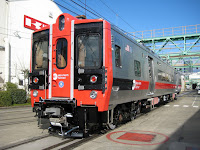 interiors and amenities, such a power plugs at each seat.


So for all of these reasons, a lot more people are taking the train.  Good news, right?  Yeah, but in the long run, not so good news because we’re not keeping up with demand.
More riders without additional capacity means crowding, and we’re hearing more reports about that, especially at rush hour when some trains are SRO.  And that’s only going to get worse.
The problem is, we didn’t order enough new M8 cars back in 2005 when we placed our order:  just 300 cars for $762 million.  That worked out to $2.54 million per car.
By the time those cars finally went into service in 2011, CDOT and Metro-North realized they should order more. This time, just single un-powered cars, so trains could run with 7 or 9 cars, not just 6, 8 or 10 using the “married pairs” in the original order.
But by then, Kawasaki whacked us $3.3 million per car… and those newest single cars don’t even have motors.   Were we to try ordering more M8 cars today, who knows the price… or delivery time.
From the legislature’s approval of the M8’s in 2005 through design, testing and construction, the first M8’s took 6 years.  The latest single-car order took 4 years.  So even if we were to call Kawasaki today, we couldn’t get new cars until probably 2020 even if we could find the money.
Meanwhile, the Malloy administration is pushing an almost $10 billion, multi-year plan to widen I-95 and I-84.  By the time it’s done, crowding could be so bad on our trains that getting on a four-lane wide interstate might just be better alternative.  Ironic, no?
at October 11, 2015 No comments: