"Getting There" - The Hartford Line

There’s finally some good news on transportation:  a new commuter rail line, The Hartford Line, is set to open this spring. 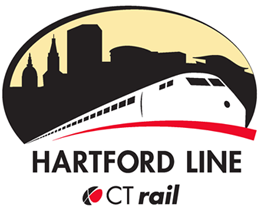 Decades in the dreaming and years in the planning, the state-owned commuter line will run 17 trains a weekday between New Haven and Hartford, stopping at State St (New Haven), Wallingford, Meriden, Berlin and Union Station in downtown Hartford.  Twelve trains on weekdays will continue north, stopping at Windsor and Windsor Locks before ending their run in Springfield.

Parking will be free at Berlin, Wallingford and Meriden, at least until the fall.  When service expands there will be a train every 30 minutes in peak hours and every 60 minutes off-peak.  In some parts of the 62-mile run the trains will hit speeds of 110 mph, compared to the 79 mph max currently on Amtrak.

Some of the runs will use Amtrak equipment, but all trains will honor new, lower CT Rail fares.  While Amtrak currently charges as much as $47 one way from New Haven to Springfield, all trains on The Hartford Line will sell tickets for just $12.75 for the same trip.  And New Haven to Hartford will be just $8.

There will be the usual discounts for seniors, 10 trip and monthly commuters.

Those fares, coupled with free parking and a massive marketing campaign, should lure road-weary commuters off of I-91 and onto the rails.  At least that’s the hope, and there’s a lot of money riding on this plan.

Connecticut got lucky in 2011 when Florida Governor Rick Scott turned down federal money for mass transit in his state and we quickly grabbed the funding.  Millions were spent double-tracking the line and building beautiful new stations, which are hoped to be the catalyst for TOD (transit oriented development) nearby. 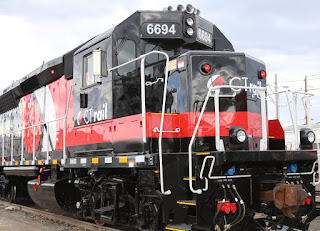 Also new is the railroad’s operating agency.  CDOT by-passed Amtrak (which operates Shore Line East and still owns the tracks for The Hartford Line) and went with TransItAmerica Services and Alternate Concepts, a joint venture which won the 5 year, $45 million operations contract.

Insiders tell me they’ve got a waiting list of job applicants for conductors and engineers, most of them Amtrak and Metro-North veterans fed-up with their experiences there.  The new operators promise great customer service.  Compared to Amtrak and MNRR, there’s nowhere to go but up.

One big disappointment for all concerned is that the train service will start, not with shiny new rail cars, but hand-me-down rail cars from MBTA in Massachusetts.  The original plan was that MNRR’s electric-powered M8 cars would be running on Shore Line East by now, freeing up that line’s diesel push-pulled equipment to run on the Hartford Line.  But that hasn’t happened, so CDOT went scrambling looking for railcars, which are in short supply nationally. 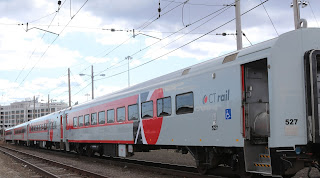 What they got were 16 cars, each 30 years old, which have been rehabilitated and “deep cleaned” inside and out and given FRA’s stamp of approval to run.  They’ll be fine for now and eventually The Hartford Line will get its own new railcars.

Start date was supposed to be late May, but I’d prefer they wait ‘til everything is perfect rather than rush to open “on time” and disappoint riders in any way.  Right now it looks like opening-day will be in mid-June.

"Getting There" - Second Guessing the CDOT

Years ago a US official touring China’s amazing new 225-mph high speed rail network commented: “It’s amazing what you can do in a country that only needs three people to make a decision”.  No public hearings, no environmental impact studies… no dissent.

In this country we have a different system.  Consider CDOT’s many multi-million dollar projects, their public process and, as a result, how slowly they progress.

The CDOT deserves a lot of credit for their transparency on this project, including a  dozen or so open houses, information forums and public hearings they have held. They’ve even opened a walk-in information center nearby.  There are weekly updates and a robust website, in multiple languages, to keep Norwalkers updated on the nine-year project.

Nobody can say the public isn’t involved.

The project has been brewing since 2015, but only now are the protests really ramping up in the form of a lawsuit.  At issue is whether replacement of the swing bridge is really necessary or whether a fixed (unmovable) bridge would suffice.

Plaintiffs say that a fixed-bridge wasn’t considered, but should have been, even if it meant getting the Norwalk River upstream officially closed by act of Congress after buying out the local marinas and oil terminals that might lose barge service as a result.

But the CDOT says that option was cost-analyzed and would only save 11% of the construction cost, while still disrupting the area and the demolition of the Aquarium’s IMAX theater.

I’m not a lawyer (or an engineer), so I can’t opine on either the legality or engineering decisions.  But that hasn’t stopped others from questioning the CDOT at this late point in the process.  Everyone seems to have an opinion, whatever their qualifications.

Some are even waxing nostalgic about the Victorian-era look of the bridge, hoping its iron superstructure could be preserved or replicated, because it is such a part of the city’s identity. Maybe the city’s motto should be “Norwalk:  We live in the past.”

But where were these people three years ago when the project was in its development phase?  How much work (time and money) might be lost if their litigious second-guessing further stalls this crucial project?

Remember:  this bridge is being replaced because it is used by 200 daily trains carrying 125,000 passengers on Amtrak and Metro-North.  There’s a lot at stake if it isn’t fixed.

Another case in point: the Cribari Bridge over the Saugatuck River in Westport built in 1884.  This swing bridge carries vehicular traffic on Rt 136 but is so old and crumbling that CDOT recently put a 20-ton weight restriction on the span.  That means fire trucks can’t get across.  But the town and CDOT have been battling for years over replacing the Cribari bridge.

Preservationists want to keep its ornamental steel truss filigree even though it’s regularly struck by traffic.  It’s another battle of nostalgia over practicality.

I’m all for citizen engagement in transportation planning.  But at some point we have to trust the professionals, yes… the engineers, to do the right thing and build for the future.  The time for kibitzing should have a statute of limitations.

Our crumbling infrastructure cannot wait to be rebuilt.

"Getting There" - Grabbing The Best Seat

"Getting There" - What Happens When We Run Out of Oil

"Getting There" - Saving Money Riding Metro-North

Whether you’re a daily commuter, an occasional day-tripper or have friends visiting from out of town, everyone can save money when you go into NYC on Metro-North by following this time-tested advice:

TRANSITCHEK:     Get your employer to subscribe to this great service, which allows workers to buy up to $260 per month in transit using pre-tax dollars.  If you’re in the upper tax brackets, that’s a huge savings on commutation.  A recent survey shows that 45% of all New York City companies offer TransitChek which can be used on trains, subways and even ferries.

GO OFF-PEAK:      If your train arrives at Grand Central weekdays after 10 am and you can avoid the 4 pm – 8 pm peak return hours, you can save 25%.  Off-peak fares are also in effect on weekends and holidays.  Your train may be less crowded, too.  These tickets are good for 60 days after purchase.

BUY TICKETS IN ADVANCE:      Buy your ticket on the train and you’ll pay the conductor a $5.75 - $6.50 “service charge”… a mistake you’ll make only once!  (Seniors: don’t worry, you’re exempt and can buy on-board anytime without penalty). There are ticket machines at most stations, but the most convenient  tickets are those bought online using the new e-Tix app.  And go for the ten-trip tickets (Off-Peak will save an additional 15%).  They can be shared among family members and friends and are good for six months.

Seniors, the disabled and those on Medicare get 50% off the one way peak fare.  But you must have proper ID and you don’t get the discount in the morning rush hours.

CHEAPER STATION PARKING:           If you're a regular commuter, don’t waste money parking at comparatively “expensive” station garages like South Norwalk ($ 12 per day), Stamford ($11) or New Haven ($18).  Instead, park at the day-lots in nearby towns for as little as $4.  But be sure to pay at the pay station before boarding the train.

Once you’re in the city, you can save even more money.

METROCARDS:     Sorry Grandpa, subway tokens are no more.  The nifty MetroCard can be bought at most stations (even combined with your Metro-North ticket) and offer some incredible deals:  put $5.50 on a card (bought with cash, credit or debit card) and you get a 5% bonus.  Swipe your card to ride the subway and you’ll get a free transfer to a connecting bus.  You can buy unlimited ride MetroCards for a week ($32) or a month ($121).  There’s now even an ExpressPay MetroCard the refills itself like an EZ-Pass.

BUT…  IS IT CHEAPER TO DRIVE?:      Despite being a mass transit advocate, I’m the first to admit that there may be times when it’s truly cheaper to drive to Manhattan than take the train, especially with three or more passengers.  You can avoid bridge tolls by taking the Major Deegan to the Willis / Third Ave. bridge, but I can’t help you with the traffic you’ll have to endure.

Check out www.nyc.bestparking.com  to find a great list of parking lots and their rates close to your destination, some offering discount coupons.   Or drive to CitiField (it’s still Shea Stadium to me) where parking is cheaper and take the # 7 subway from there to GCT.

The bottom line is that it isn’t cheap going into “the city”.  But with a little planning and some insider tips, you can still save money.  Enjoy!