Any regular reader of this column knows that I hate to fly.  I’ll enjoy an overnight Amtrak sleeper ride to Chicago over a 3-hour flight, anyday (or night).
But when I do have to fly, I really like seeing grey hair in the cockpit.  The older and more experienced the pilots, the better (despite this crazy FAA rule that pilots must retire at age 65, regardless of their health).
The other place I like to see experienced aviators is in the cabin, i.e. the flight attendants.  No longer are “stewardesses” seen as sex objects to entertain business men (remember “I’m Cathy… Fly Me!”?) or mocked in songs as nothing more than “waitresses in the sky”.
In my mind, flight attendants are under-paid, over-worked and unappreciated safety experts.
A few years ago I was in an emergency landing of a Boeing 767.  The flight crew performed perfectly and nobody was hurt.  Since then I listen to every safety briefing and study all my options for egress. 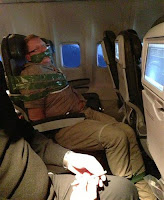 But increasingly, flight attendants (and passengers) are being called upon to protect a flight from other passengers… like the drunk maniac on a recent Icelandair flight who had to be subdued, or the JetBlue pilot who went psychotic and had to be wrestled to the floor.  “Coffee, tea or duct tape, sir?”
Flight attendants earn an average of $35,000 - $40,000 per year.  New hires start at $14,000 and, as a sign of our desperate times, there’s no shortage of applicants.  When American Airlines announced last November they’d be hiring 1,500 new flight attendants they got 20,000 app’s. (Question:  do those jobs automatically come with Food Stamps, or do they have to apply separately?)
Unlike most jobs, flight attendants are paid not when they show up to work, nor when they board a plane, but only when that plane departs from the gate.  The time clock ticks 65 – 90 hours a month, but there is no pay for the average 50 hours a month spent prepping flights, doing paperwork and waiting at airports.
Sure, there’s the glamour of free travel and over-nighting at airport hotels.  But as anyone who travels for work will tell you, that glamour wears thin when you’re constantly on the road.  And that’s when you’re on an expense account.  Flight attendants do this for a living and make about $10 an hour.
Is it any wonder that, being human, flight attendants occasionally snap?  Like the JetBlue male “stew”, Steven Slater, who cursed out his cranky passengers, popped the emergency exit and slid to the ground at JFK.
As I’ve written before, flying is no fun.  It is crowded, expensive, unglamorous and tedious.  And if it feels that way for the occasional passenger like me, God bless the poor flight attendants who have to do it for a living.
at January 21, 2013 No comments: