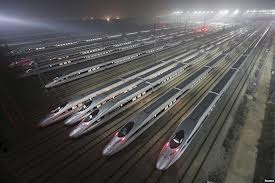 Last week, China opened the world’s longest high speed rail line.  From Beijing the line runs 1,428 miles south to Guangzhou, roughly the distance from New York City to Key West.  At an average speed of 186 mph, the 1000-passenger, 16-car trains will cover the distance in eight hours.  Trains depart every 10 to 12 minutes in each direction.
Though construction of high speed rail only began in 2007, by 2015 China will have a national network of over 11,000 miles of high speed rail lines carrying more than 3 billion passengers annually.
Envious?  Sure.  Why can’t we build something like that in the US?  Lots of reasons.  But consider what we are building.
By 2016, Connecticut will have a new commuter rail line, its first in decades, running 60 miles from New Haven through Hartford and on to Springfield MA.  The $647 million project is fully funded ($388 million in Federal money, $259 million in state bonding) and is on, if not ahead of, schedule.
The double track line will eventually offer trains every half-hour, carrying an estimated 1.7 million passengers a year.  Today, Amtrak diesels chug along the line on a single track offering eight trains a day carrying 380,000 passengers a year. (PS:  It remains to be seen who will run this new state-owned railroad, Amtrak or some other operating agency.)
While most Amtrak passengers are connecting in New Haven to Northeast corridor trains, this new “Knowledge Corridor” line will offer not only seamless cross-platform connections to Acela, Metro-North and Shore Line East, but point-to-point service among its 13 stations. 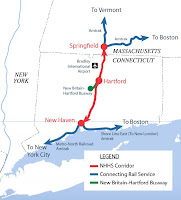 At three stations there will be connections to CTfastrak (the new $567 million bus rapid transit system opening in 2015).  And at Windsor Locks you’ll be able to hop off the train, onto a shuttle bus and be at Bradley airport in just minutes.  Eventually there may be through trains north to Montreal and east to Boston via the inland route.
There are plans for 200 – 300 parking spaces at most stations.  But the real hope is that TOD (Transit Oriented Development) will work its magic and people will be able to live, commute to work and get back home without a car.
The economic potentials are amazing:  work in downtown Hartford or New Haven but live, shop and eat in Wallingford or Windsor and never have to own a car!  Already the land around the proposed stations is being grabbed up for development.

Another issue for the communities served by the new rail line will be the 32 grade crossings.  More trains will mean more gates dropping across busy roadways and more warning horns being sounded.
One thing the new rail line will not be is “high speed” (125+ mph).  Earlier hype about bullet trains running parallel to I-91 has been replaced with more reasonable expectations:  the new trains will cover the 60 miles between New Haven and Springfield just eight minutes faster than existing Amtrak trains (thanks mostly to raised platforms and less ‘dwell time’ at stations).  But what they lack in speed they will more than make up for in frequency of service.
For more information on Connecticut’s newest rail line, visit their website: http://www.nhhsrail.com
at December 30, 2012 1 comment:

The Commuter Council - Working For You


A stranger walked up to me the other day while I was waiting for the train.  “Are you Jim Cameron,” he asked.  “I sure am,” I said, expecting a tirade of complaints about the railroad, the fares and the stations.
“I just wanted to say ‘thank you’,” he said.  “You guys on the Commuter Council do a great job looking out for commuters.”  We shook hands, and as he departed I got a little misty-eyed. 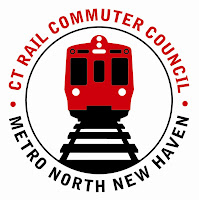 The fifteen members of the CT Metro-North Rail Commuter Council, are all commuters, just like you.  We’re appointed by Hartford pol’s and receive no compensation and have no budget.  We meet monthly with Metro-North and CDOT and pay our own way.
And here’s what we did on your behalf this past year:
STAMFORD GARAGE:     We stopped CDOT from a secret sell-out of the old garage at the Stamford station to private developers.  Our leafleting and outreach forced public hearings and, finally, the appointment by Governor Malloy of a five-person task force to represent the public and commuters’ interests in reviewing proposals for a new garage.
QUIET CARS:         For five years the Commuter Council has been beseeching Metro-North to embrace the idea of a cellphone-free “Quiet Car” on each train.  This year our cries were finally answered, giving commuters a better option for what the railroad calls a “Quiet CALMmute”
NEW SERVICE:      At the request of the Council, CDOT and Metro-North improved service for riders from Rowayton, East Norwalk, Southport and Greens Farms stations.  While those stations used to have trains only every two hours off-peak, now they have hourly service.
NEW CARS:           For a decade the Council has been pushing for new cars to replace our worn-out fleet.  Now they are arriving at the rate of ten a month.  That means you have a 50% chance of riding the new M8 cars in rush hours and a 66% chance of enjoying them on weekends.  When the last of the 400+ new cars is delivered, the old fleet will be scrapped.
TICKET EXPIRATIONS:    Last year Metro-North pulled a fast one and shortened the validity period for tickets.  One-way tickets, which used to be good for a month, became worthless after 14 days.  And ten-trip tickets, previously valid for a year, expired after six months.  The Council (and, apparently, hundreds of riders) protested and recently the railroad relented, returning the single-ride tickets to 60 days validity.
As much as we have accomplished, there’s still more to be done:
PARKING:    Having expanded our fleet of cars by 15%, CDOT has done nothing to expand station parking in southwest Fairfield County.  If we want people to take the train, we’ve got to get them to the station and that means more parking at all the major stations.
TICKET COLLECTION:    The Council is still concerned that conductors are not doing their jobs and collecting all fares.  Metro-North says it’s not cost efficient to staff trains with enough conductors to get all tickets, yet they ask for higher fares claiming they are losing money.
BIKES ON THE TRAINS:  Years ago when our broken down cars were standing room only, we opposed the idea of allowing bicycles on the trains.  That’s changed.  Now we have more cars and seats for all.  So it’s time for Metro-North to live up to its promise to install bike hooks in cars.
What are your concerns about commuting?  Contact us and let us know how we can best represent you:  CTRailCommuterCouncil@gmail.com or www.trainweb.org/CT
at December 16, 2012 No comments:

How to Avoid the Next Fare Hike on Metro-North

Don’t look now, but there’s a 5% fare increase coming January 1st 2013!
But if you’d like to avoid paying more, here’s a simple (and legal) trick:
BUY TICKETS BEFORE 12/31:   There’s nothing stopping you from buying tickets before the January 1st fare hike of 5%.  Just be sure you can use them before they expire and become worthless (see below).
Here are some other money saving tips for commuters, daytrippers and familes:
TRANSITCHEK:      For commuters, see if your employer subscribes to this fabulous service, which allows workers to save up to $500 a year in mass transit costs by using pre-tax dollars.  A recent survey shows that 45% of all New York City companies offer TransitChek which can be used on trains, subways and even ferries.
GO BY TRAIN OFF-PEAK:          If you can arrive at Grand Central on weekdays after 10 am and avoid the 4 pm – 8 pm peak return hours, you can save 25%.  Off-peak is also in effect on weekends and holidays.  Your train will be less crowded, too.
BUY TICKETS AT THE STATION:        If you buy your ticket with cash on the train you’ll pay the conductor a $5.75 - $6.50 “service charge”… a mistake you’ll make only once!  There are ticket machines at most stations, but the cheapest tickets are those bought online.  And go for the ten-trip tickets, peak or off-peak, to achieve additional savings.  The same ten-trip ticket can be shared among passengers, even those traveling together in a group.
LOOK OUT FOR NEW TICKET RULES!:        Watch out!  Metro-North changed its ticket rules last year in what many consider a hidden fare hike.  One way and round-trip tickets are now valid for only 60 days.  Even ten-trip tickets are now valid for only six months.  And forget about getting a refund on an old ticket, even if it hasn’t expired.  Refunds cost $10 per transaction.
KIDS, FAMILY & SENIOR FARES:           Buy tickets for your kids (ages 5 – 11) in advance and save 50% over adult fares.  Or pay $1 per kid on board (up to four kids traveling with an adult, but not in morning peak hours).  Seniors, the disabled and those on Medicare get 50% off the one way peak fare.  But you must have proper ID and you can’t ride in the morning rush hours.
FREE STATION PARKING:         Even rail stations that require parking permits usually offer free parking after 5 pm and on weekends.  Check with your local town.
Once you’re in NYC, you can save even more money on mass transit.
METROCARDS:     MetroCards can be bought at most stations (or combined with your Metro-North ticket) and offers some incredible deals compared to the $2.25 cash fare:  put $10 on a card (bought with cash, credit or debit card) and you get a 7% bonus.  Swipe your card to ride the subway and you’ll get a free transfer to a connecting bus, or vice versa.  You can buy unlimited ride MetroCards for a week ($29) or a month ($104).  There’s now even an ExpressPay MetroCard the refills itself like an EZ-Pass.

The bottom line is that it’s never cheap going into “the city”.  But with a little planning and some insider tips, you can still save money.  Enjoy!