The Merritt: Queen of All Parkways


Cruising along on the Merritt Parkway awhile back I was struck by its natural beauty, unique bridges and amazing landscaping.  But until I did some research, I didn’t appreciate its history. 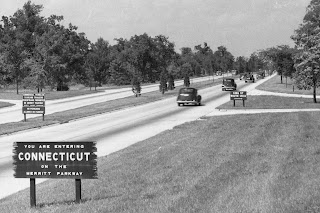 A hundred years ago the only way to drive between New York and Boston was on Route 1, The Post Road.  If you think traffic is bad today, imagine that journey!  So in 1936, two thousand men began work on the state’s largest public works project, the $21 million four lane parkway starting in Greenwich and running to the Housatonic River in Stratford.  The adjoining Wilbur Cross Parkway didn’t open until years later when the Sikorsky Bridge across the Housatonic was completed.
As the Merritt was being planned, a major real estate scandal caught Darien real estate agent G Leroy Kemp in cahoots with two brokers as they paid inflated prices for land for the parkway and split the proceeds.
The Merritt, named after Stamford resident, Congressman Schuyler Merritt, is best known for its natural beauty, though most of it was planted:  22,000 trees and 40,000 shrubs.  And then there are the bridges, since 1991 protected on the National Register of Historic Places.
Architect George Dunkleberger designed 69 bridges in a variety of architectural styles, from Art Moderne to Deco to Rustic.  Their adornments were better appreciated when cars were 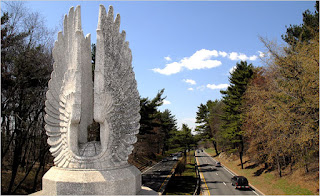 poking along at half of today’s speeds, but they are still beautiful. No two bridges are exactly alike.  In short order the Merritt was being hailed as “The Queen of Parkways”.

The parkway at first had tolls, a dime (later 35 cents) at each of three barriers, not to pay for the parkway’s upkeep but to finance its extension to Hartford via the Wilbur Cross Parkway, named after Wilbur Lucius Cross who was Governor in the 1930’s.  Tolls were dropped in 1988. 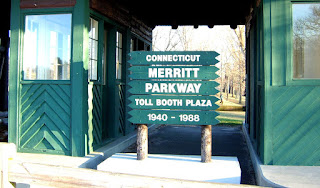 The old toll booths themselves were as unique as the Parkway, constructed of wooden beams and covered in shingles.  One of the original booths is now preserved in Stratford at the Boothe Memorial Park.
The Merritt’s right of way is a half-mile wide, the vistas more obvious now since massive tree clearing after the two storms in 2011 and 2012 where downed trees pretty much closed the highway.
Since its design and opening in 1938 the Merritt Parkway has been off-limits to commercial vehicles and trucks.  But as traffic worsens on I-95, debates rage from time to time about allowing trucks on the Merritt and possibly widening the road.  Either move would probably mean demolition of the Parkway’s historic bridges, so don’t expect such expansion anytime soon.
The best watchdog of the Parkway is the Merritt Parkway Conservancy which has fought to preserve the road’s unique character.  Their latest battle is against plans for a multi-use trail along the south side of the roadway. Costing an estimated $6.6 million per mile, the Conservancy worries that the trees and foliage that would be clear-cut to allow bike and pedestrian users would despoil the eco-system.
Posted by JIM CAMERON at Tuesday, June 23, 2015 No comments:

The Budget's End Did Not Justify the Means


As someone who has battled two decades for more spending on transportation, you’d think I would be happy with the state’s new biennial budget.  But when you drill down into the details, there’s reason for concern.

Governor Malloy promised a down-payment on his $100 billion transportation dreams.  And he did get one-half of one percent of the state sales tax re-purposed for that… but it only pays down the CDOT’s enormous debt service.
That must have come as a surprise to his recently appointed Transportation Funding Task Force which is just getting started.  Why have a task force when you’re playing a shell game with transportation funds?
Not kept was the Governor’s promise for a “lock box” on the Special Transportation Fund.  Nor did he keep his promise to not raise taxes, having the chutzpah to blame the legislature for that when it was very clear that the budget’s new taxes were negotiated by his team with his blessing.  As the Governor signs the new budget into law, he owns those hikes and broken promises.
There will be tax hikes on the middle class, sin taxes (cigarettes and Keno – a tax on ignorance) and corporations.  You know it’s bad when GE, Aetna and Travelers all scream in pain, though they’ll doubtless be paid off to stay put just as UBS was paid $20 million years ago.

Any budget that narrowly passes the House 73-70 and the Senate 19-17 in an “emergency vote” without debate bears closer scrutiny, especially in a state with one party so clearly in control.
CT-N’s coverage of the marathon two-day final session showed lawmakers who were deliberately sleep deprived, kept at their desks all night

debating measure after measure until they were exhausted.   Sleep deprivation is a great interrogation technique for terrorists but no way to pass new laws.

I am told that Democrats who did not toe the party line on this budget and threatened to vote “no”, were told to “go home” rather than cast a negative ballot.  Indeed, in the final House tally eight lawmakers did not vote, some because they were said to be “sick”, others because they were “absent on other business”.  What legislator misses the final ballot on a two year, $40 billion budget that passes by a single vote?
So divisive was the final debate, the Governor didn’t even have the guts to speak to lawmakers after the budget session ended, a long-standing tradition.
I have respect for the office of Governor, but also believe strongly in open, transparent government “of the people, by the people”.  Beware the tyranny of any one party when majority power is so brazenly wielded and the public is ignored.  Governor Malloy did deliver on his promise to start funding long-neglected transportation projects.  I just disagree with the way he did it.
Keep your eyes on the prize but embrace the process.  Whatever good came out of this year’s budget process, those ends did not justify the means.
Posted by JIM CAMERON at Sunday, June 07, 2015 No comments: