"Getting There" - Public Hearings or Political Theater?

In recent weeks I’ve been criss-crossing the state talking to folks about our transportation crisis:  the proposed fare hikes on trains and buses coupled with service cuts on the branch lines, and the multi-billion spending cuts at CDOT.

From Woodbridge to New Canaan, from Old Lyme to West Haven, I’ve talked to crowds large and small, explaining what’s going to happen July 1st and why.  Most folks knew something about our impending doom, but they all left unhappy about the cuts’ specific impact on their lives.

Like the First Selectwoman from Old Lyme who said taxpayers were going to have to spend $600,000 repairing a local bridge because, for the third year in a row, CDOT doesn’t have enough money to share with municipalities.

Or the manager of The Roger Sherman Inn in New Canaan who said she’d probably have to close if off-peak train service was cut on the branch, making it impossible for her cooks and waiters to get to work.

But the culmination of all these presentations was last Tuesday night’s public hearing in Stamford before an SRO crowd of 200+ angry residents.  I’d come more to listen than talk, but couldn’t resist and used my allotted three minutes to ask…

“What are we doing here?  Why are we at this hearing when nothing that you or I say tonight will do anything to change the inevitability of these fare hikes and service cuts?  This may be cathartic, but it’s just political theater.  The folks you should really be talking to are not from CDOT but your State Rep and State Senator.  The legislature created this funding problem and only they can fix it.  If they raise the gas tax and get serious about making motorists pay their fair share, none of these service cuts or fare hikes will happen”.

I was speaker number 11 of more than 80 who signed up to speak.  Some of them waited 4 hours for their few minutes in front of the mic.

But not the politicians.  As State Rep’s arrived, they were whisked by the CDOT Commissioner to the front of the speaker’s line, jumping the queue.  The Commissioner is no fool.  He knows who controls his budget and it isn’t the old guy with a walker complaining about the buses.

When the pols spoke it was the usual platitudes but no new ideas.  “Don’t raise fares, find other funding sources,” said one.  What funding sources?  To their credit, some of the pols did stay to listen, but others (including at least one gubernatorial hopeful) did their grandstanding and split.

One State Rep did have the guts to poll the crowd on their appetite for raising the gasoline tax and tolling our roads, both of which got loud support, much to his surprise.  The people have spoken so now’s the time for action.

By the way… what kind of message does it send when scores of New Canaan residents go to the Stamford hearing to oppose rail service cuts but take a chartered bus instead of the train?

People are angry.  But they need to direct their anger not at the CDOT but at the legislature, holding them accountable for their inaction.

"Getting There" - A Private, For-Profit, Passenger Railroad

There is no profitable passenger railroad in the United States.

Amtrak and commuter lines like Metro-North all operate at a loss as a public service, their deficits borne by tax dollars.  But in January all that changed as America saw the launch of “Brightline”, a privately owned, for profit passenger railroad in Florida.

Running between Fort Lauderdale and West Palm Beach, the railroad is owned by Fortress Investment Group, which has ties to Florida East Coast Railways over whose freight tracks the new passenger trains will run.

So far the $3 billion invested in the railroad has delivered only 46 miles of track but plans are to extend the line south to Miami and north to Orlando Airport by 2021.  The trip from Fort Lauderdale to West Palm Beach takes just 34 minutes, averaging 79 mph and costs $10 one way in “Smart Coach” class, $15 in “Select Coach” (first class).  That’s hardly enough time to get settled in let alone enjoy the comfy Acela-style seats, complimentary Wi-Fi or free snacks in the pricier seats.

Trains run every 90 minutes on weekends, more frequently on weekdays.  Eventually they hope to offer four trains an hour (compared to two an hour on Metro-North). The commuter-line TriRail runs between the same stations (for $5.65 one way) in about an hour, thanks to nine intermediate stops compared to Brightline’s nonstop express.

Driving the same distance on Florida’s I-95 would take 47 minutes, assuming an average 65 mph, which is nearly impossible on that crowded interstate, in some places 16 lanes wide!

On its opening weekend, a VIP inspection-train killed a pedestrian crossing the tracks (after 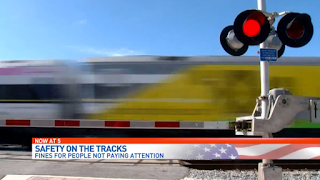 the warning gate had been lowered) in Boynton Beach FL.  Since testing began of the new trains, six people have been hit by the trains, four of them killed.  Despite the fatalities, local residents are trying to force the railroad to suspend use of its horns as locomotives fly along at speed.  That’s pretty stupid, if you ask me.

Brightline’s owners aren’t counting just on passengers to make their railroad profitable.  Wisely, they are expecting real estate (which they own) adjacent to their stations to become quite desirable.  They’re building a 290-unit residential building in West Palm and another 816 units in a mixed-use, 11-acre site near the railroad’s eventual Miami hub.  Not only will they have a captive ridership but their rent money as well.

This is also Connecticut’s dream:  transit oriented development.  The only difference is that in Florida Brightline owns the land near their stations.  CDOT does not, with the exception of parking lots like Stamford station’s which have long been eyed as a revenue source to subsidize our trains. 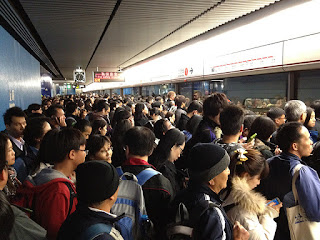 In Hong Kong the privately-owned Mass Transit Railway (MTR) turns a profit of $2 billion a year not just by running one of the world’s best subways, but by owning the shopping malls and skyscrapers above its stations.  Turning an 85% operating profit, the MTR can invest in new trains and passenger amenities while still keeping fares at about 50 cents a ride.

We’ll see if Brightline can find its audience and turn a profit.  If they do, their success may be a model for other private investment in this crucial public service of mass transit.

"Getting There" - Big Brother is Along for The Ride

Don’t look now, but someone is joining your travels:  Big Brother.

You assume you’re alone, traveling in your car to and from work?  No, you are being watched.  All along I-95 TV cameras are looking for accidents and slow downs.  Though there are specific state laws prohibiting the use of those cameras to write speeding tickets, they can follow your car by model, color and license plate number.

Many local cops’ cruisers have license plate readers, scanning every plate and sending its information to a national database that can alert the officer to outstanding warrants, lack of insurance and other stoppable offences.  Some departments store their scan data for weeks, others for years.

Now, the Immigration and Customs Enforcement agency (ICE) is contracting with a private company to have access to a billion license plate records, allowing the agency to know where you were and when.

If you have an EZ-Pass, it’s being “pinged” for more than just paying tolls.  The NYC Dept of Transportation uses hundreds of E-ZPass readers in Manhattan, it says, to monitor the flow of traffic.  But the NY Civil Liberties Union calls that an invasion of privacy.

And, of course, our cell-phones are constantly transmitting our location and speed to services like Google and Waze, though you can turn that off.  It’s even alleged that hackers can use Waze to track you.  And have you checked your Google Location History lately to see everywhere you’ve been and when?

Even outside of your car, you’re still being followed.  Metro-North just added security cameras to its trains, watching both the engineer and the passengers.  There are cameras, as well, at stations and on NYC buses.  MTA (and NYPD) can easily track every swipe of your MetroCard (tied to your credit card).  Of course, they’re only looking for bad guys, not you.  Right?

Traveling by air?  Well, in addition to a full luggage search and body pat-down by the TSA, now the airlines and US Customs agency are using facial recognition to allow you to board your flight and leave the country.

If you’re bound for Aruba on JetBlue out of Boston you won’t even need a boarding pass as your face will identify you to the airline… and who knows who else.  The whole process take two or three seconds and is billed as a “convenience”.

US Customs hopes to use facial recognition for arrivals into this country starting this summer.  Meantime your RFID chip-enabled passport will be necessary.  But do you know what information about you is encoded in that chip?  US Customs says there is no personal data on the chip, just a reference number corresponding to your personal information stored on their computers.

Like all RFID chips, your passport’s can be “pinged” from up to 30 feet away, so some travelers are now shielding their passports with expensive wallets lined with metal.

Don’t want Big Brother to join you on your journeys?  Wear a disguise, strip yourself of all technology, and try walking or riding a bike.  Or just stay home, curled up in a paranoid-induced ball, worrying.