Update on High-Speed Rail Around the World

U.S.A.:         America’s fastest train, Acela, while a tinker toy compared to true high-speed rail in China and Europe, is becoming a victim of its own success.  Acela has captured over 50% of the NY to DC and NY to Boston market with hourly departures but an average speed of only 75 mph.  Trains are sold out (with 3.4 million passengers a year) and, at least on paper, highly profitable.  But when Amtrak looked at adding an extra car to each train to capitalize on this popularity, they concluded it would be too expensive.
But Amtrak has been experimenting with increasing Acela’s speed from 125 to 160 mph on a few stretches of track in NJ and RI.  Some $450 million in work will be needed but the hope is the faster speeds could be achieved by 2017.  Today Acela accounts for a quarter of all Amtrak revenues nationwide.

FRANCE:     If it worked for the airlines, why not high speed rail?  France’s government run railroad is about to launch a no-frills, discounted subsidiary branded “OuiGo”.  Using rebuilt double-decker TGV equipment, the trains will be super cheap but with few amenities (think Southwest Airlines on rails).  All ticketing will be online.  Extra bags will cost you $8 in advance, $65 if you wait til the last minute.  There are no café or bar cars on the trains.

A seat near an electric outlet is extra.  You have to arrive 30 min before departure, and OuiGo only uses suburban, not downtown, stations (appealing to the car-centric suburbanites near Paris).  But for a little hassle, you can get to Marseille (on the Mediterranean) in three hours for as little as $13.

NETHERLANDS – BELGIUM:     Not all high-speed rail in Europe is a smashing success.  Witness “Frya”, the private rail service between Brussels and The Netherlands (in planning since 2004) that was to cut travel time by one-third using sleek new V250 trains (ironically named “The Albatross”) built in Italy.  While lowest bidder Ansaldo Breda had a great track record building trams and commuter trains, when their V250 finally ran this Winter, ice build-up began ripping plates from beneath the trains.  (See… Metro-North isn’t the only railroad with equipment problems in the Winter!).  The V250 cars were declared unsafe and taken out of service while the lawyers go at it.
at April 29, 2013 No comments:

In the eight years I’ve been writing this column I’ve never found a reason to write about cruise ships, one of my favorite ways to travel.
Since my Dad took me as a passenger on freighters through the Caribbean when I was a kid right up to our now-annual cruises to the same area, I’ve always loved the high seas.  There’s nothing easier than driving to the pier in NYC, hopping on board and kicking back for a week.
A few years ago my fascination with cruising brought me to a great book, “Devils on the Deep Blue Sea” by Kristoffer Garin which detailed the formative years of the cruise industry, especially the start-up of Carnival Cruise Lines in 1972.  It was a rough start, but today Carnival owns ten cruise lines (almost half the cruise ships in the world) including Cunard, Holland America, Costa, P&O, Princess and Seabourn.  At one point they even had their own airline ferrying passengers to Miami and San Juan, their biggest embarkation ports.
By segmenting the cruise market, just as hotels do, they offer everything from singles-filled party cruises to upscale trans-Atlantic “crossings” on the Queen Mary 2 (which is where I was while reading Garin’s book in 2006).
But more recently Carnival’s had some very bad PR.
Last year it was crash of the Costa Concordia in Italy (whose Captain abandoned ship).  Then, the February stranding of the 4,000-person “Triumph” for days in the Gulf of Mexico (without power, food or sanitation) was just the latest in a series of engineering problems.  Last week another ship, Fascination, failed a CDC health inspection, the fourth of their ships to do so this year alone.
Last week demand for cabins was so low that Carnival was offering cruises for $38 a night per person… less than the cost at Motel 6.  And that price includes all meals (assuming those CDC inspections don’t hurt your appetite).
Admittedly, this is a weak time of year for cruising, but Carnival knows it’s always best to sail with a full ship and make money on the booze and ship excursions.
In my view, the real problem isn’t Carnival or its ships’ safety, but the fact that they pay no taxes… and yet, depend on the US Coast Guard for their numerous rescues.
Micky Arison, son of the founder of Carnival (and owner of the Miami Heat), is the richest man in Florida.  Last year Carnival brought in $15.3 billion in revenues.  But they paid just 0.6% in US, state, local and international taxes last year while socking taxpayers for millions in US Coast Guard expenses for 90 different rescue missions in the last five years.
Senator Jay Rockefeller says Arison is a “cheater… treacherous and wrong” and wrote him asking to do the right thing and pay-up.  Carnival declined the invitation, prompting Rockefeller (the Chairman of the Senate Transportation Committee) to call their response “shameful”. 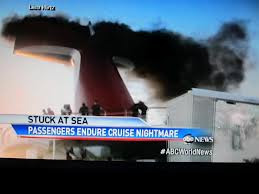 Shameful, perhaps.  But perfectly legal and the result, even Rockefeller admits, of sloppiness by Congress.  So, expect some grandstanding, a few hearings and maybe some face-saving philanthropy by Arison.  But don’t expect many changes in the cruise industry, especially in higher fares that reflect the true cost of being a “devil on the deep blue seas”.
at April 12, 2013 1 comment:

Who do you think has the toughest job in transportation?  Airline pilots?  Long-haul truck drivers?  Metro-North conductors?    To my thinking, the toughest job is being an airport TSA agent.
Forget the recent furor over revised Transportation Security Administration rules soon to allow small knives in carry-on luggage.  The plastic knives the flight attendants distribute in snack packs in-flight are already sharp enough to slit a throat.  By not worrying about every pen-knife and nail clipper, TSA agents should have more time to concentrate on truly lethal weapons.
A far bigger threat to aviation security is liquid explosives and non-metal knives.  Ceramic knives are undetectable on magnetometers, which is why the TSA brought in those full-body scanners we love so much.
But I think the biggest threat to aviation safety is the public’s anger at the TSA agents who are just doing their job.  After a thorough TSA screening at an airport last month I saw an angry passenger literally curse at the agent.  That passenger wasn’t pulled aside and given a retaliatory body cavity search. To her credit the agent kept her cool and didn’t get into even a verbal fight.  Could you be so thick-skinned?
It’s been 12 years since 9/11.  Have we forgotten what can happen when determined, armed terrorists take over a plane?  The TSA screens 1.8 million passengers a day.  If just one of those fliers got an undetected weapon onto a plane and blew it up, imagine the uproar.
Remember the holy triad of service:  fast, good and cheap.  You can achieve any two of those, but not all three.  Clearly, the top priority is “good” security.  So in this age of sequestration we’re unlikely to see quality compromised for speed.
If you want to fly, put up and shut up:  put up with the long lines while the agents do their jobs properly to keep you safe and keep your mouth shut.
Passenger protests have brought some TSA screening changes which seem arbitrary.  Like the recent rule allowing passengers over age 75 to keep their shoes on.  Terrorists can’t be that old?
And what passes for the rare TSA inspection of Amtrak passengers is more for show than real security. Unless every bag is opened, the rare and random briefcase examination or quick dog-walk through a moving train seems to be just “showing the colors”.
What do all these TSA inspections do, aside from create long lines and frustrated fliers?  They turn up an amazing amount of weapons.  The TSA’s weekly blog makes for fascinating reading.
In one recent week alone the TSA intercepted 32 firearms, 27 of them loaded, and ten stun guns. There were clips of ammo, brass knuckles and (no surprise) sheer stupidity:  a passenger flying out of San Juan told the ticket agent that her bag contained a bomb and she was going to blow up the plane. After an inspection by the TSA, her bag didn’t have a bomb. But as a result of her threat, the ticket counter, checkpoint and terminal were closed for nearly an hour, inconveniencing thousands.
And there were, as the TSA blog put it, “consequences” for the flier.
at April 04, 2013 No comments: