I hate to say “I told you so”, but…  Just as I’d predicted, Governor Malloy’s hand-picked Transportation Finance Panel has finally issued its recommendations for paying for the governor’s 30-year,  $100 billion transportation “plan”.
First off, the Governor’s “plan” is not a plan but a wish-list of projects for all 169 towns and cities in the state.  It has been vetted by no one and has no priorities, (though CDOT

Commissioner Redeker says about two-thirds [$66 billion] would be for repairs and replacement of what we already have, not any grandiose schemes for monorails down the middle of I-95.)

Interestingly, as it began work last summer the Transportation Finance Panel wasn’t allowed to debate the merits of anything in the Governor’s “plan”, so all they could do was suggest how to fund the whole thing.
Atop their newly issued report is a telling quote:  “If something’s worth having, it’s worth paying for.”  Duh!  But that’s a pretty soft sell on this mega-plan given the unpopularity of their funding suggestions:


That last idea is a doozey.  It suggests that if someone owns private land next to a new transit station and it appreciates in value, the increased taxes collected by the town should be shared with the state. 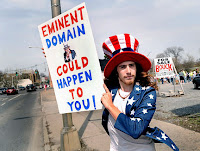 That is perilously close to last year’s Machiavellian bill that would have created a quasi-state agency, the Transit Corridor Development Agency (all of whose members would be appointed by the Governor) which would have the power of eminent domain on any land within a half mile of a bus or train station.  Though rejected, that idea is already being re-thought by OPM, so watch out this session.

But before you set your hair on fire… don’t worry.  All of this is moot.  Nothing is going to happen, and here’s why.
The Governor says that none of his panel’s proposals should even be discussed until there is a transportation “lock box” in place.  That won’t happen until November’s election and will depend on passage of a constitutional amendment ballot question.
Why the delay?  Because the Democrats in the legislature don’t want to have to vote on something as unpopular as tolls or taxes before the next election.

Meanwhile, even Governor Malloy seems distracted from his transportation mega-plans, as he is rumored to be lobbying for a cabinet seat in the Clinton administration come 2017. And the Presidential campaign season will doubtless see Governor Malloy on the road quite a bit on behalf of his could-be boss.

So don’t look for a widened I-95, high-speed rail or new deep-water ports anytime soon.  The legislature will be busy with more important things, like getting re-elected, before they can deal with funding the Malloy “plan”.
at January 31, 2016